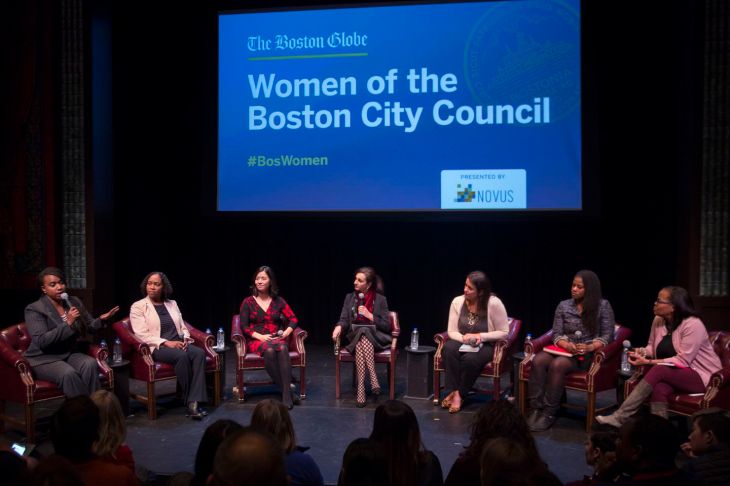 ^ from 2017 but still a thing, I guess : attention paid to what the Councillors look like rather than  what they are tasked to do

Much has been said about who the incoming Boston City Council members are. Not at all much as been suggested about what they want. I myself am not sure what they want: but it’s worth this column to offer some suggestions, not of what they want — though I may opine thereupon — but of what they ought to want. So here we go.

The Council is empowered by Article 17 of the current City Charter. It gives the Council power to input to the City Budget and to approve it or not. The Council may hold hearings and may ask the Mayor to appear before it. It may subpoena people to appear at a hearing. Councils past have made liberal use of the hearings power. Ordinances don’t always result, but the issue raised gets publicity and arouses activism. Thus the Council wedges its foot into the actual door of City power, the office of Mayor.

All of the above, we know. Refer back to it as I now proceed:

The Council elected in November ought to want the following :

( a ) a serious audit examination of the School Department budget, which currently amounts to $ 1.27 billion and will likely surpass $ 1.5 billion in the coming fiscal year. When I went through the FY 2020 budget, I found many areas of inefficiency, some incompetence, and a far too great attention to salaries rather than supplies and maintenance. The School budget takes up fully one-third of all City spending. It cannot go on goosing the taxpayer as it does.

( b ) as the total value of taxable real estate in the City balloons, why is the City strapped for tax receipts to fund its basic obligations ? If Proposition 2 1/2 limits the City’s ability to tax its taxable real estate values fairly, perhaps an override would be in order. Of course that would free the City’s voters to take hard looks at how the City spends what it already budgets. It is not at all edifying to see the Council pressure tax-exempt institutions to pony up ever bigger “in lieu contributions.” Tax-exempt property is tax=exempt by law. It ill behooves the Council to use extra-legal means to get money they are not legally entitled to have. If tax exemptions annoy the Council, let it seek a home rule petition to the legislature to adjust the State’s property tax exemption criteria.

( c ) schools again. By far the most frequently mentioned issue by actual voters is their lack of confidence in BPS : its management, its maintenance, its assignment by lottery, its classrooms and its curriculum. In the most starter-home-dominant precinct that I canvassed during this past campaign — Ward 18, Precinct 22 — we saw at least a dozen homes with “for sale” signs. In ONE precinct ! Families are moving to the suburbs, not because they need to or even want to but because they dare not chance their kids to a School System managed as arbitrarily and ineffectively as Boston’s. In Bostons’ family neighborhoods the word is “if the kiddo doesn’t get into Latin, and there’s no room available in the parish school, we’re out.” The Council cannot simply pass this buck to the Mayor’s appointed school committee. It should demand major, massive reform. There’s so much talk, in campaigns, about “gentrification” ? Well, if you don’t want regular Boston people to move out — and sell their home, very likely, to a “gentrifier” — then DO SOMETHING ABOUT THE SCHOOLS. Either that, or shut up about “gentrification.”

( d ) Address climate change with common sense. Yes, Boston’s coastline is at risk of serious flooding. Engage innovative citizen groups like The Harborkeepers, whose proposals for channeling and making use of the Harbor and the beaches accept the inevitable by channeling it. Also, plant trees. Lots of trees. The City has begun to focus on wetlands protection : well and good, but far more effective as a climate mitigator is to increase the City’s verdure. Plant trees in City parks and along City streets wherever feasible.

( e ) scrap the so-called “affordability covenant” by which developers of large projects must set aside a percentage of units at “affordable” prices. Currently the covenant number is 13 percent. Some Councillors may want to raise that to 20 percent/. Nothing could be more foolish. If a developer has to take a loss — land acquisition and construction costs are what they are, covenants notwithstanding — on 13 percent of her units, she’ll have to jack up the price of the other 87 accordingly. At 20 percent, the jack up would be even bigger. Thus the “affordability covenant” aggravates the inequity that now dominates Boston’s economics. Instead, the City this past year increased its “linkage fee” — the amount that it charges commercial developers for the permit to build. (Kudos to Councillor Edwards for advancing this ordinance.) Linkage fee increase doesn’t skew residential development at all, and it doesn’t affect commercial building much either. If any sort of “affordability” move is to be made, within the real estate arena, increase the linkage fee again.

( f ) make it easier, not harder, for car-owning residents to park on public streets. That said, don’t forget, when establishing “resident-only” zones, that residents have visitors. There’s also exceptions difficult for regulations to accommodate : a few years ago Rino’s Place, a famous East Boston restaurant sited in an entirely residential zine, had to petition its way out of a residents-only zone that left its customers hanging.

( g ) when seeking special road lanes for MBTA buses or for bicyclists, keep in mind that most of us use automobiles to get from here to there, and every lane denied to us makes  worse the traffic you guys complain about. The people of West Roxbury had practically to rise up in arms last year to block a big speed bump — and a set-aside street lane — that threatened to render Centre Street all but impassable.

( h ) spare us the MBTA street theater. Repairing the T’s infrastructure is difficult work that can only be done during late night down time and, at public inconvenience — on weekends. Get the T’s repair message — tweeted regularly by MassDOT, the T itself, and by general manager Steve Poftak, a Boston resident — to the voters instead of doing a fireworks show. It isn’t hard ! I do it all the time, and I went out of my way to explain T decisions to voters while I was door knocking for a Council candidate. Much of what I let voters know — by showing them the T’s twitter account on my iphone — they did not know. Why can’t you Councillors do the same that I did ? It ain’t all THAT hard, is it ?

The above by no means completes the list of initiatives the incoming Council should take up. Every day during the past campaign we heard from voters unhappy about streets and sidewalk maintenance, trash pick-ups, snow removal, and signage. I get the impression that many Councillors want to address big-picture issues that will get them media attention rather than doing basic clean-up. This is understandable. Who wants to clean the dishes or mop the bathroom floor when there’s a Trump outrage to protest or an MBTA blooper to get frothy about ? But in my mind, it’s up to the Council to do that floor mopping and dish washing. Protesting doesn’t fix one street sign, and frothing can’t get a neighborhood street snow-plowed.

It would also help if Councillors could set aside the entire value system encased in the phrase “what …. looks like.” Quite frankly, the voters don’t care — and I don’t care — WHAT you look like. Being a City Councillor is not doing an Instagram selfie. Being a Councillor is being an employee, hired by the  voters to do an entry-level, basic beans-counting job. If you want an example of how to do the Councillor job description, obtain and read one of Annissa Essaibi George’s newsletters. It’s all there, in detail, plus information which you will likely not find elsewhere — important information at that. Or you might ask yourself how did Lydia Edwards ever get elected as District One’s Councillor, since she doesn’t “look like” a District that is barely four percent African American ? She certainly didn’t get elected, nor has she performed as a Councillor, by “looking like” (although she is in fact gorgeous) but by being what a Councillor is supposed to be : attentive to ALL the voters and focused on every issue no matter how block-local.

This is not to say that Councillors who “look like” their District majority don’t do their job. But I think it’s more tempting for Councillors who represent their area’s largest tribe to pursue demagogic paths. Those who support the principle of tribal election point to James Michael Curley as an example. Some example ! He broke the law and went to jail even as he waved the “no Irish need apply” flag long after such discrimination had vanished from  Boston’s economy. The incoming Council is a lollipop of tribal temptation : it has 8 women, only 5 men; five women of color. Only one of the four at-Large is male. There are many to whom this situation is a rally flag, an electoral objective. I would hope that that sort of vicarious indulgence passes from the scene as soon as possible. There is no way for “looking like” to do the boring, un-newsworthy jobs that our City Council is charged with doing.

The voters can’t say it often enough, I guess : “We don’t care what you look like, just GET THE JOB DONE.”