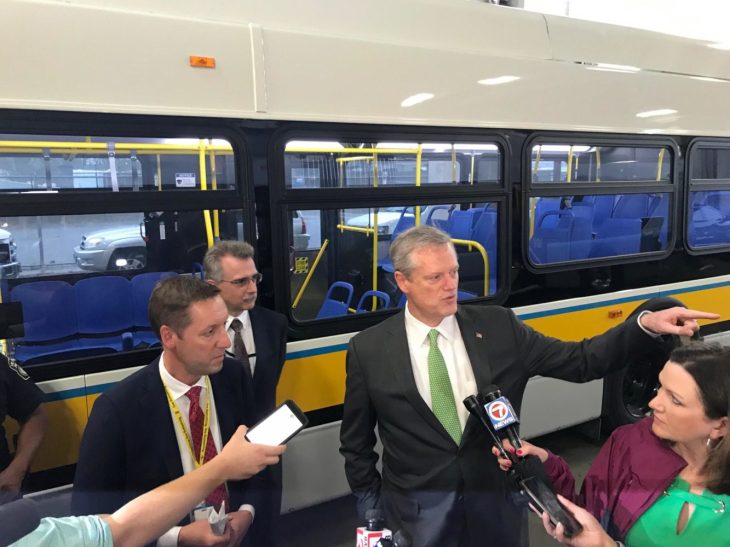 Whether he likes it or not, Governor Baker is now Massachusetts’s “transportation governor.” Of the many problems facing our Governor, many of them challenging and even intractable for any government, the state’s transportation situation surely ranks high. Higher than the opioid addiction epidemic ? Affordable housing ? Schools performance ? Possibly. Certainly in political terms, transportation comes first. Not necessarily with the voters — at the door, in the campaigns that I am working, schools challenges get many, many more mentions than transportation issues — but with activists and executives as well as most media, the state’s traffic congestion has take the top spot. Which means that it must take first place with Governor Baker as well.

It’s an obstacle to us all and to him. No transportation fix can be quick. Roads and bridges can’t just be closed down for repairs. Nor can the T or commuter rail. They must all be fixed while being used — a riddle that no Governor can resolve. Which means that fixes will linger and last and hang around even as they’re being fixed. Baker sets the year 2032 as the target date for bringing the T and commuter rail fully into the 21st Century — signals and track, trains and cars, electrification, service expansion, greater frequency of trains and T cars, you name it.

The Governor’s recent submission to the legislature of an $ 18 billion bond bill announces his acceptance of a long term commitment — well beyond his term ending in 2022 —  to the transportation challenge. Today the Boston Globe reports two additional Baker proposals : ( 1 ) creating opt-in, toll-paying lanes on some of the state’s major roads and ( 2 ) including buses in the opt-in lane. I am skeptical of set asides that set one form of transportation apart from another, and I most definitely do not want the opt-in tolls to b e diverted to the MBTA / commuter rail budget — tolls charged to users of roads and bridges should be used for roads and bridges. Still, if we are to have dedicated lanes, and it seems that we can’t avoid it, then the Governor’s plan is  a workable one. You want to escape traffic ? Pay for it. You want buses to arrive on time and to not take forever to make a trip ? Let buses use dedicated highways lanes.

You can read the Governor’s press conference on this proposal here : https://www.masslive.com/news/2019/08/gov-charlie-baker-open-to-charging-fees-on-managed-lanes-to-reduce-traffic-congestion.html

Critics of Baker’s suggestions say ( 1 ) that opt-in lanes favor those who can afford it, and secondly, that the way to price traffic is to charge drivers a surcharge for driving in peak traffic hours. My response is, first, that so what if opt-in lanes earmark those who can afford it ? Getting them and T buses off the rest of the highway frees up traffic on both the opt-in lane and the rest of the highway. Second, I agree with the Governor that surcharging those who drive in peak traffic hours penalizes people who have no other good option. To which some critics respond that congestion pricing will push drivers to forgo cars and use the T. My response : first, government has no business pressuring people to use one form of transportation over another and second, the T goes where it wants to go, not necessarily where you want to go, and it goes there when it wants to, not necessarily when you want to. The T is a controlled environment, and most people prefer to be their own control, which is why we use cars, not controlled transport.

I think that Governor Baker gets what I am saying; that he has no intention of pushing free people into an unfree environment for the sake of transportation rationales. The T and commuter rail must serve us : we do not serve it and should not be made to serve it. Fixing the T and the commuter rail, and applying highway lanes more skillfully than the current method, cannot be rushed, cannot be excuses for changing our tax system or reallocating our tax allocations. The city “progressives” who want the traffic challenge to be their entry into a state of higher taxation and controlled movement cannot be allowed to stampede us, nor to fool us by their street theater of emergency. Alleviating metro Boston’s traffic density can NOT be hurried, MUST not be hurried, nor should it engender “temporary” taxes and other crisis suspensions of regular order. Patience here is not only required, it is wiser than you may think. In patience come suggestions that might actually pass muster with the voters rather than rushing into places much to be regretted later.

Nor is metro Boston’s traffic density likely to recede any time soon. It results from the new urban prosperity that has transformed Boston from an empty downtown surrounded by ethnic residencies to an international entrepot of enterprise, social life, community, shopping, and fun. Immigrants are making money here, young tekkies are inventing new devices and interfaces, businesses that serve them are prospering, and everybody wants to be part of it. Our big problem is that wages have lagged the rest of the boom, prices especially. Traffic and T antiquity impose time burdens on those who want to get around, but the burdens exist because the City is alive, dynamic, cool. Hopefully, if we make good decisions, it will remain alive, dynamic, and cool — and a bastion of liberty, not control by others.