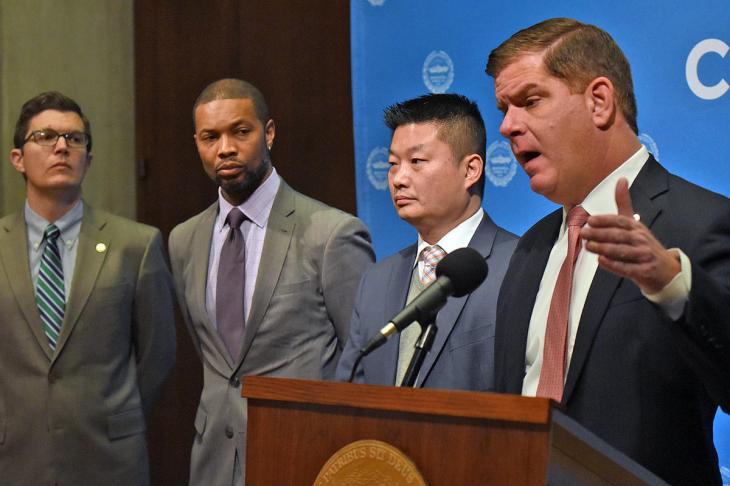 ^ Superintendent Tommy Chang (with Mayor Walsh’s Schools chief Rahn Dorsey to his left) answer questions about the school budget miscues. Chang is on the spot, but the problem is bigger than just his superintendency.)

Even a Boston Schools budget skeptic like me was shocked to be told, about a month ago, that an IRS audit found that, for many years, the Department has been using funds from one account to fund another. The report, in a Boston Globe story dated November 28, deserves to be quoted extensively :

“The City of Boston paid nearly $1 million in penalties to the federal government after an IRS audit revealed wide-ranging problems with the city’s payrolls, from schools paying stipends to individuals under the table to the city failing to deduct Medicare withholding taxes for many employees, according to findings released Tuesday by the city.

The IRS described broad financial dysfunction in the School Department’s oversight of the funds and listed myriad excuses from school employees:

“The individuals responsible for the school activity funds had various reasons for not having any payments go through the payroll system including: ‘Those records were thrown out, I was unaware of documentation needed, responses are based on memory, no recollection of what payments were for, the person wasn’t a city employee, therefore not on payroll, I had no access to making a payroll payment, I don’t have the names, the work was not covered by our BPS budget, they were temporary positions,’ ” according to the audit.

The IRS ran into some of its biggest problems with the School Department. It examined student activity accounts at 16 schools for 2014 — the year before Chang became superintendent — and three-quarters of them had problems, involving $150,000 in spending, according to the audit findings.

In several instances, the findings paint a picture of sloppy bookkeeping by the schools, including a lack of receipts. In other cases, schools failed to fill out necessary tax forms for payments made to vendors, creating confusion about whether the appropriate parties paid taxes. While the IRS looked at only a sampling of schools, the problems were so severe that they raised concerns about schools across the city, prompting BPS to take systemwide action. However, the School Department did not inform the School Committee until last week about the IRS findings.

I’ve written often about the waste and inefficiency that abounds in the Boston Schools (“BPS”)  budget — the City’s biggest single account, totaling about one-third of the entire City budget — and the many millions needlessly misspent therein are reason enough for a major overhaul of the BPS budgeting process. Still, I had not questioned the Department’s bona fides. Now I must do that. If the IRS audit’s report is true, lots of BPS managers just don’t get it. Many questions must be asked :

( 1 ) The School Committee is charged with reviewing the Budget. Why did they miss these misdeeds ?

( 2 ) The Department has a chief financial officer, Eleanor Laurans, styled “Director of School Finance.” How did these misuses escape her scrutiny ?

( 3 ) The City paid the IRS a fine of about $ 944,000. Mayor Walsh told the Globe that he did not know of it until notified by the paper. Who kept the information from him, and why ?

( 4 ) The report states that some employees were paid “under the table.” Really ? Who did the paying ? Who approved it ? I assume that someone has to issue the check. Or were they paid in cash ? I assume that however they were paid, someone had to make a requisition.  What reasons were given ?

( 5 ) Is there discretion, at the individual school level, for funds from one account to be used for another ? If so, who has that say ? i assume it’s the principal. Can a teacher make that decision on her own ?

We’re already formulating a FY 2019 School budget. Last year’s totaled $ 1.081 billion — about a three percent increase from the FY 2017.  The large increase —  one percent as been the norm — results from the City agreeing to a new Boston Teachers’ Union’s collective bargaining contract. The $ 50 million increase was still not enough, evidently, to fund some basic school needs because none of the waste and anomalous items in the budget were corrected. Will that be true this year as well ? (As last year was election time for the Mayor, it is quite understandable that he decided not to raise any interest group’s hackles with respect to BPS budget difficulties.)

The public comment period for BPS FY 2019 is open already. I’m pretty sure that the IRS audit findings will be argued about; they darn well should be. It is high time that the City’s voters hold its largest single Department to account for money misfeasance, inefficiency, and waste — beginning with some $ 13 million paid to teachers who have no teaching job because no principal will hire them, and including at least $ 50 million of maintenance and utilities costs at school buildings that should be closed (and consolidated) because they’re enormously over capacity (BPS maintains buildings for 91,000 students but only about 56,000 actually enroll.)

At election time every candidate talks about how “every school should be an excellent school,” etc. etc.; and of course almost every voter understands this to be a cop-out. It;’s hard to have even passably effective schools when the budgeting operation lacks respect for tax regulations, much less performance demands.

Do I blame the teachers ? Not really, though surely some may fall short. I call out school management. DO YOUR JOB.

Monitor your finances rigorously. Insist on a dollar of value for every dollar requisitioned from the taxpayers. Reduce waste as much as feasible and correct the obvious, unsupportable inefficiencies. Do all of this openly, and broadcast it, so that the City’s taxpayers — some of whom are also BPS parents — can have confidence that its public schools aren’t gaming them and failing the kids who depend on schooling to get from childhood to useful careers in the real world.