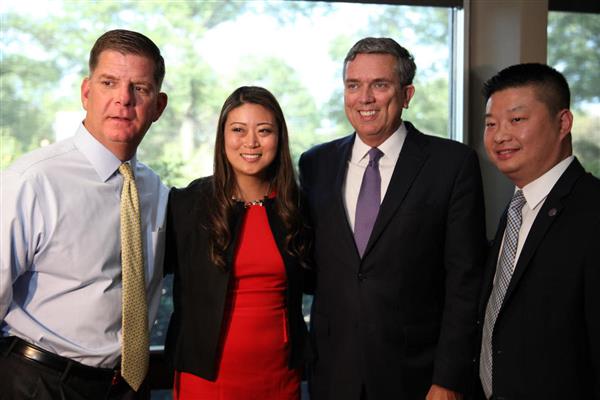 As reported in Monday’s Boston Globe, Boston Schools Superintendent Tommy Chang’s study of his district;’s performance disclosed much failure. This is hardly a new story. Boston’s Public Schools do not uniformly perform well. Much of the system’s shortfall is found in schools serving primarily a minority population or students whose first language is not English. These are precisely the students to whom the Schools system should dedicate extra effort and its most capable pedagogues.

Why does the so-called “achievement gap” persist ? Despite decades of bewailing its persistence, its stubborn inability to betterment ? I have no simple answers, and the usual suggestions strike me mistaken. Yet answers there must be. No child, of whatever skin color or national origin, possesses any less learning capability than any other. (I put aside from this generality special needs students, whose abilities are impeded by one or another physical or mental factors.) As all children come to the learning years with roughly the same capabilities, achievement gaps between them must be the system’s doing.

Political conditions do not help. Before I list what I see as Boston’s schools’ learning issues, let’s take a look at the politics of a $ 1.061 BILLION school budget, about one-third of the City’s entire annual expenditure.

You would think that $ 1.061 billion would suffice to educate 54,000 students amazingly well. Evidently it is not enough. Some parents claim the schools budget falls about $ 50 million short of basic needs. Many cite lack of classroom equipment, of text books, of laptops; others point out the sorry condition (as reported in some media) of the school system’s meals program. There is scant time, in the Boston system’s six hour day for arts courses. Even those schools that have adopted a six hour and forty minute day fall short of the state’s eight hour school day standard.

As I see it, Boston’s school politics difficulties do not stop there. The budget includes about $ 16 million, paid to teachers who have no assignment because, given previous poor job evaluations, no principal will have them. Why must city taxpayers accept $ 16 million to no result at all ? In addition, why does the City maintain school buildings constructed for 91,000 students when only 54,000 attend ? Consolidating the present 126 under4-utilized school buildings down to about 70 would save at least $ 50 million in maintenance and utility costs.

So much for the budget, which is scheduled to increase again, in fiscal year 2019, by at least two percent, all of it slated to salary hikes negotiated in the new Teachers Union contract. A propos : in this year’s budget, 84 percent of the $ 1.061 billion ($ 835 million) goes to staff salaries. Another 17 percent ( $ 178 million) pays for “contractual services” — including the  transport of students to schools all over the city, pursuant to a Federal Judge’s desegregation order put in place 42 years ago ! Only $ 17.6 million — less than two percent of the budget —  is left for classroom, equipment, meals, and curriculum development.

Let that sink in.

All the more reason why the $ 66 million spent upon structural over capacity and unemployed teachers needs be re-purposed. Yet even this is not the whole answer. Just this week, metal detectors were installed at East Boston High School. What kind of message does that send to current students and their parents ? Or to parents of children not yet of school age and trying to decide whether to trust the Boston school system ? Maybe metal detectors are needed. If so, that’s a serious indictment of a school system that cannot be in the security business as well as accomplishing curricula.

Now back to the achievement gap and Superintendent Chang’s report of “under-performance.” Can it be believed, at least ? One wonders. parents of children attending the Mendell School on School Street in Jamaica Plain assert that its under-perform rating must be wrong, that many innovative practices and achievements are going on in a school whose work they praise highly. Maybe so. Nonetheless, I think the following reforms would help enormously to c lose the “achievement gap”:

( 1 ) institute a teacher home visit program, such as John Connolly’s pioneering 1647.com efforts, by which parents and students become fully engaged. All studies indicate that parent engagement is crucial to children’s school success.

( 2 ) shorten the travel distances for students to their assigned school, so that parent-teacher organizations (PTAs) can be revived. They worked well when they ruled school co-operation.

( 3 ) authorize every school principal to hire and fire every pedagogic person on his or her staff. Ensure that the Principal oversee all teacher performance evaluations.

( 4 ) allow principals to develop their own school’s curriculum, adapted to his or her actual student body and its needs.

( 5 ) encourage and even require parents to read to their pre-0school children and motivate such kids to read on their own, as early in life as feasible. Reading early assures mastery of basic comprehension skills.

( 6 ) require total immersion in English for students whose first language is not English. Conversely, require English language kids to study a foreign language. The comparison of two or more language thought systems enlightens the understanding mind to other ways of thinking about things.

( 7 ) establish a school breakfast program as well as a lunch, at no cost to the kids, consisting of healthy foods but also entertainingly tasty. Food should never be bland, or dusty, or stale, and never should depend on a student’s bank account. Many students come to school hungry; eat well, and they learn better !

( 8 ) for schools serving primarily a minority student body, encourage innovation and challenge. Never ask less of students of color or foreign origin. Ask more of t.hem, and give them teachers and a curriculum that require that “more.” Students will feel as proud to be treated like an elite body of troops, just as they would feel disrespected to be addressed as softer or denser than others.

Politicians like to say “every school in Boston must be a level one school.” Of course they should. But almost no politicians that I hear speak about it ever say why our schools fail or how they can be made better. This too must change. Platitude speeches gain us nothing but an excess of boredom.