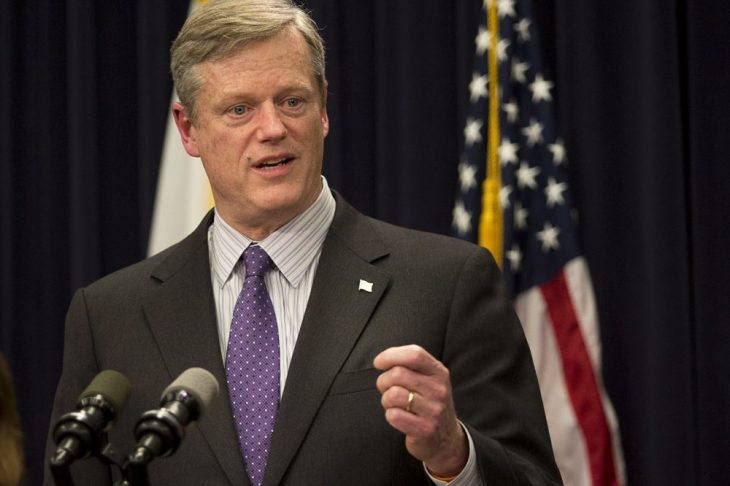 ^ Governor Baker : the manager in chief proposes a bold budget for 2018, maybe too bold for some

How do you like a $ 40.5 billion state budget, a spending increase of 2.7 percent ? That’s the question that Governor Baker’s 2018 proposal asks you, the state’s voters. There’s much to like in the explanatory letter that accompanies Baker’s presentation. I especially applaud its near elimination of the structural state deficit, from $ 1.5 billion three years ago to under 4 100  million; its refusal to ask additional taxes (but note the presence of some new assessments); and its $ 98 million contribution to the Stabilization Fund — money in reserve in case of unexpected state revenue shortfalls. Baker’s budgets are a model of solid, triple-A financing : stable, well protected, almost fully paid for. But why not read his proposal letter for yourself ? Here’s the link : http://www.mass.gov/governor/press-office/press-releases/fy2017/gov-baker-releases-fiscal-year-2018-budget-proposal.html

Not everybody is happy. Environmental funding falls short of the stated goal of “one percent ($ 405,000,000) of budget committed. Cities and towns complain that the $ 91,400,000 increase in what is now a $ 4,719,000,000 chapter 70 compensation for charter school students is the smallest in many years and far from enough. The MTF itemizes Baker’s “policy choices” in this item as follows (you are free to0 agree or not)

The $91.4 million increase to Chapter 70 reflects several policy choices, including:

 Increasing Foundation Budget rates for “employee benefits and fixed charges” by between 2 and 10 percent depending on grade and type of school;

 Ensuring that all school districts receive at last $20 per pupil in new state aid;

 Allowing districts that are judged to have too high a local share of school funding to reduce their contributions;

 Providing sufficient state aid to ensure that all districts meet their base “Foundation Budget.”

Health care costs continue to rise faster than revenue growth. Even after receiving $ 9,068,119,986 in Federal funds, the budget allocates $ 7,194,371,331 for health care, an increase of $ 262,961,927 over fiscal 2o017. Health care in the new budget also offers some controversial fees and restructuring. Baker seeks a $ 2,000 fine for businesses with more than  60 employees that do not offer their workers company-sponsored health insurance plans.

As the MTF says it :

Since the implementation of the Affordable Care Act that expanded eligibility for MassHealth, the transition of workers from employer coverage to MassHealth has been a major factor in MassHealth enrollment growth. The assessment is intended to ensure that employers whose employees may be opting to enroll in MassHealth are picking up some of the costs. Unlike the Massachusetts health care reform law, the ACA contains no prohibition on individuals who are offered employer-sponsored coverage from choosing to enroll in the state’s Medicaid program.

The idea of assessing employers for failing to offer adequate insurance to full-time employees is not new. In fact assessing employers who failed to meet insurance coverage criteria with a “Fair Share Contribution” was a cornerstone of the Massachusetts health reform. However, there are several notable differences. Under the Massachusetts reforms, an employer satisfied the requirement with an offer of coverage and was not penalized if an employee declined the offer. The original fair share contribution was much smaller in scope (it generated approximately $20 million per year as opposed to $300 million), with a lower assessment amount and a much lower threshold for avoiding assessment. The Fair Share Contribution was repealed in 2013 as part of ACA implementation because the federal law included a larger employer assessment and MA did not want to impose an additional penalty. The assessment in the ACA, like the House 1 proposal, envisioned a $2,000 per employee fee for employers that did not meet coverage criteria, but the ACA assessment has never been implemented and the coverage criteria were less strict than the House 1 proposal.

Baker is also proposing other changes including payment caps for some providers, a moratorium on new insurance mandates, creating new plan options for the health insurance exchange and increasing transparency tools.

All of these new proposals arise from a long-term restructuring of our state’s health care system that Baker and I talked about three months ago. He was quite upset about having costly health care items dumped in his lap, that should have been planned out during the previous administration. (What Baker actually wanted was a state waiver from the Federal ACA, which crossed up our state’s own universal health care operation, but none was given. Now Baker is left with figuring how to recalibrate our universal health care operation in light of the ACA’s subsidy regulations and changes to employer-based health insurance plans. You can take a look at the new Budget’s health care situation (and much else) at this link to the MTF’s budget analysis :

Because health care amounts to about 40 percent of the entire budget, thereby limiting discretionary spending (including chapter 70 compensations and funds for environmental, opioid treatment, senior aides, and various types of incarceration reform) — not to mention cost-cutting measures including outsourcing MBTA maintenance — Baker has a solid point when he asserts that restructuring our state’s health care budget cannot be pout off any longer, that fiscal 2018 is the place to start. He’s probably correct about that; but 2018 is an election year, and the constituencies left short by Baker’s budget priorities may not agree with his urgency.

One budget characteristic that cannot easily be complained of is its commitment to workforce education and job placement. In far too many school districts, students graduate unready for even entry level employment; post-graduate organizations fill the gap, and Baker’s 2018 budget rewards their efforts with substantial addit9ional funding.

Can Baker’s 2018 budget meet its ambitious deficit target of under $ 100 million ? The items he is counting on to reduce the basic deficit from $ 832,000,000 include some that may fall short and a few that my not happen at all (especially the 4 2,000 employer fine for not offering health plans to workers). And of course this budget is only a proposal. The legislature will surely change it. I seriously doubt if its small chapter 70 increase will survive, or the 4 2,000 employer fine, or the $ 60 million reduction in MBTA transfers, or the reduction in funds for alleviating homelessness (even though homelessness has decreased measurably). So consider this proposal as an “offer” only. Negotiations on the “:offer” can begin now, with an agreement deadline still far in the future.