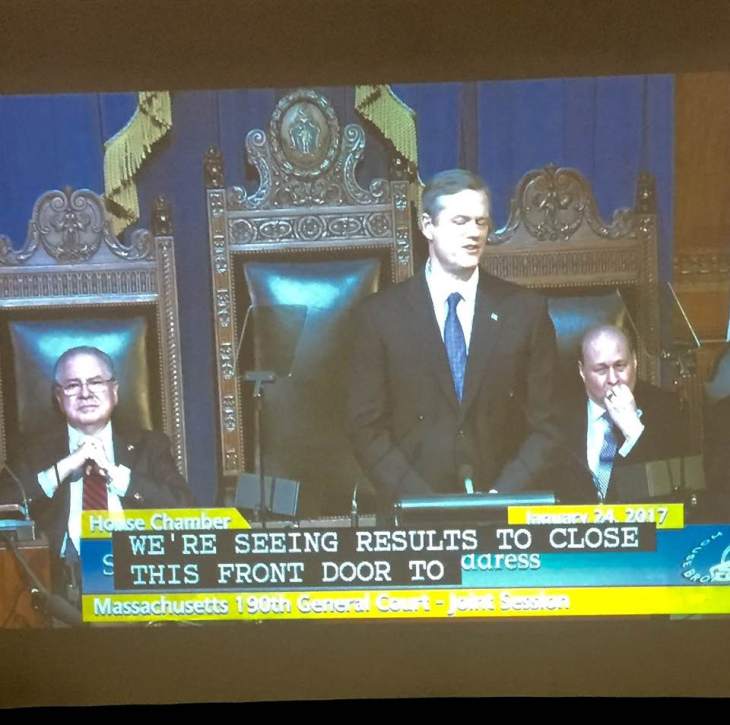 With these words  — and with others that I’ll quote below — Governor Baker delivered a “State of the State”m speech last night as opposite to what we confront from Washington as opposing it was his intention. As Baker continued, “Our obligation ton the people we serve is too important to place politics and partisanship before progress and results.”

These were concluding sentences — roundly applauded by the dignitaries, legislators, and “Team baker” activists present — in a speech dedicated almost exclusively to Baker’s policy commitments : the challenge, his response, and his estimate of how well he has responded, in some cases (such as the opioid addiction crisis and fixing the MBTA, diligent but far, far from job finished. Baker bluntly admitted that both matters would require years of remedy — no quick fixes on HIS watch.

One by one Baker assessed them all : ( 1 ) restoring DCF to full effectiveness (a job incomplete because the agency’s foster home assessment process remains unready; (2) fixing the T; increasing aid to public education, including a substantial “chapter 70 ” “reimbursement for charter school children; (3) enacting legislation ending the practice of sending drug-addicted women to women’s prison (4) reform of incarceration measures at Bridgewater State Hospital (6) solving the homelessness crisis (7) focusing business development on the growing cyber security industry, in which Baker lauded Massachusetts’ s leadership; (8) municipal law reform, the most comprehensive in 50 years; and several more works that Baker has made part of his “fix it” platform.

He did not mention the failure of last year’s charter school expansion (ballot) initiative, which he backed to the hilt: but why should he have ? That fight is over; yet the struggle to close the achievement gap for kids of color remains, and Baker touted a recent idea : the school district empowerment zone. We’ll see if this idea survives the opposition of teacher unions.

Speaking of unions, notable in Baker’s speech was his lauding union leaders — DCF social workers and the MBTA’s Carmen — by name and leading applause for what he emphasized were co-operative efforts. The Carmen’s leader, Jim O’Brien, looked surprised to be singled out, as well he might. How many Republican Governors praise the president of a public employee union ? Yet it is true: Baker and the Carmen negotiated a contract in which each side got most of what it wanted.

Thus Baker didn’t just talk about co-operation; he demonstrated it, for everyone listening to see.

Granted, that in Massachusetts, a Republican Governor has no choice but to work co-operatively with the overwhelmingly Democratic legislature and interested activists. Yet two things to note : we elect Republican Governors precisely because they have to govern co-operatively, and almost all of them have done it. But that is not the whole story of what baker accomplished last night.

First : he demonstrated that he will not be intimidated, or his policies sidetracked, by opposition from Trump supporters, nor will he take the bait often being thrown his way by partisan Democrats. Both of these oppositions simply make Baker look strong, and he showed that he understood how to use their opposition to his advantage.

Second, he flaunted the power of a political tactic that will surely be imitated for 2018 : it is a major advantage for a politician in the era of Mr. Trump to be as unlike Trump as feasible. As Baker said in his concluding remarks, “Too much of what passes for political dialogue these days…is talking points. Character assassination. And deliberate misrepresentation.”

And in case anyone in attendance missed his meaning, Baker made these his last words: Our jobs remain the same. That is to represent Massachusetts to Washington, not Washington to Masssachusetts.”

He said this same thing another way : “I can report to you that the state of Massachusets today is strong.”