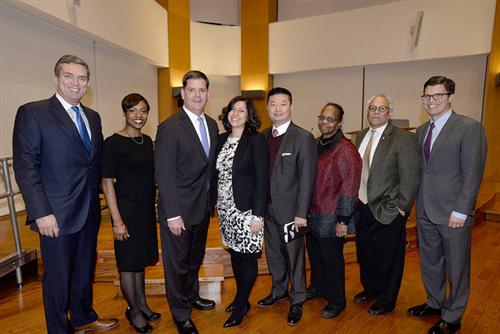 The political weather in Massachusetts right now feels vividly calm. There’s almost no noise, hardly any disputes, plenty of holiday fundraisers, a period of good feelings. can it last ?

Ahead lie budgets, always a noisemaker. What will Boston’s FY 2017 Schools Budget look like, now that charter school expansion has been decisively defeated by the voters ? Can the states’ FY 2018 budget not include new taxes ? If it doesn’t include them, how will we pay for Green Line expansion ? MBTA fixes without raising fares ? Health care reform that Governor baker has undertaken ? Criminal justice reform and opioid crisis treatment increases ?

What will we do about undocumented immigrants in the era of President Trump ? Can we accept new refugees, as we always have ? how can we protect immigrant families from being torn apart ? Can we curb the surge of hate crimes ? It’s great that Attorney General Healey is taking them on head first, but punishing haters comes only after the fact. How do we stop the fact itself ?

Speaking of Attorney General Healey, aren’t you amazed — and pleasantly thrilled — by the full assortment of crucial causes she is tackling ? Never have we at Here and Sphere been more proud of an endorsement than the one we gave to Healey in 20114m as we watch her do her job (1) fighting wage theft (2) using her regulatory authority to curb gun ban loopholes (3) taking on energy companies that fail to clean up and (4) fighting fir the safety and dignity of immigrants, transgender people and LGBT people generally.

There are some who prefer the Attorney General not be an activist on the front lines of civil rights and public safety issues. Some are c lose friends of kine. Yet how can an Attorney General, in a socially conscious, justice state stand aside when our commonwealth’s basic values and commitment to public peace are under attack ? Healey’s opponents have it backwards. They find the Second Amendment absolute and civil rights limited; in fact, in our polity,. civil rights are absolute, as per the 14th Amendment, and gun ownership is limited, by regulation. Healey defends the position that most Americans understand and support, and as she is not one ever to quit or back off — which we approve — her work will probably succeed.

But I digress. The topic of this column is the current calm, and calm it feels. Not many policy makers are sure what to do next, about Mr. Trump, about the 2018 elections, about upcoming budgets. Meanwhile, policy makers are readying budgets that will be voted on sooner than you think. During February and March 2017, the Boston School Department will present and debate its FY 2018 budget. Here the big question is : will Mayor wal;sh control the budget and its various allocations, or will vest6ed interests get their way ? Given the 63 to 37 vote that finished the charter school ideal, and the political control definitely asserted by vested interests, I think the FY 2108 budget will be expensive and needlessly in every way except the Mayor’s need to be re-elected.

The state budget promises an equally paradoxical outcome. Baker needs to begin his re-election, and the T continues to require huge sums of money that it doesn’t now have and cannot now get. Baker’s other initiatives also require large budget sums. He’s done a superb job of finding the smaller sums needed to support public drinking water, workforce grants, municipal improvements, and technology training : no Governor has done these better. But the big ticket i8tedms cannot be glued together with glue tubes almost dry of glue. A new budget day is sure to arr8ive in FY 2019, after Baker’s re-election; will the voting public wait that long ? Or will the horror stories of MBTA failures and underfunded social services programs stub Baker’s toes on the way to 2109 ? I guess we’ll soon begin to find out, as the current calm gives way to serious weather.