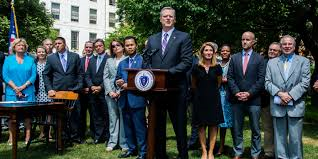 ^ Governor Baker presides : he is also trying to build a stronger Massachusetts GOP. But he faces obstacles big and numerous enough to defeat all his dreams thereof

Political parties only matter if people take them as mattering. In Massachusetts, there’s few who do that. Which is a huge problem for activists who want to boost the Republican party in our state.

The one venue in which party does matter — a lot — in our elections is for Governor. In every election since 1990 except two, a plurality (or majority) of our voters has chosen the candidate whose name appears on the ballot’s Republican line. Why do our voters make this one exception to an otherwise single-party (and thus no party) vote ? My view, which I have written about often, is that voters want a Governor who is not a Democrat, in order to bring an independent power position into play, so that the state can reach policy consensus. Of the five Republican Governors who have held office since 1990, none personifies consensus more convincingly than Charlie Baker, which is surely why his favorability numbers hover at 70 percent.

Yet even spectacular in popularity, Baker has been unable to strengthen his party much. There are many reasons for this, and I will discuss them. First, let’s agree that electing a referee Governor is hardly a mandate to be politically partisan. Baker builds a Republican party at his peril. Yet it was the same for all his four predecessors, which is why few of them tried to do it, and the one who tried — Mitt Romney — failed badly.

Most Massachusetts voters belong to neither party : 53 percent overall, much higher percentages in the towns beyond Greater Boston — some have 80 percent of all voters not party enrolled. When these voters vote, the last thing they look at is which party line accompanies a candidate’s name. (For national office, that may not be true; the Republican national party has a terrible reputation here). Yet even those who might be inclined to vote for the Republican often do not do so, because (1) the Republican candidate is almost always lesser known (2) is almost always running against an incumbent and (3) often espouses policy positions rejected by the majority of voters.

As for party enrolled, only eleven (11) percent of Massachusetts voters are Republican, whereas 36 percent are Democrats. The disproportion is far greater among activists. My guess, gleaned from decades of intense campaign involvement, is that Democratic activists outnumber Republican ones at least ten to one; and those numbers are worsening, as the age demographic among Massachusetts Republicans is mortal. Most people you;’ll see at a Republican local event are over 60, even over 70. Candidates do not appear from nowhere; almost, all are of the activist group. Just on the numbers, Republicans are three times more likely than the Democrats to not have a candidate in a particular race. Then you add the demographics. Very few candidates for local office or the legislature make their first run at age 60, much less 70. Almost all are in their 20s. Of these, the Republicans have very very few.

Young ambitious people thinking of running for office know the numbers. Unless they are ideologically inclined to the Republican party — more on this point later — they almost always decide to run as a Democrat, because it is simply much easier to win that way. Who would choose to put her name on a ballot line that eleven (11) percent identify with, when instead she can seek a nomination that 36 percent go to ? The answer is as bad as the question is sad. Almost all who choose to run as Republican do so for ideological reasons. But the GOP is ideologically way, way out of step with the views of Massachusetts voters on almost every issue. And if a candidate with majority views does decide to run as a Republican ? She’ll almost certainly face passionate opposition in the Republican primary from those who hold the opposite, “true” Republican view. Why would any ambitious young activist ant to put himself into that squeeze ?

Now we come to Governor Baker. This is the math, and the dynamics, that he must confront. I have no idea what course he COULD take to build the Republican party — other than to continue doing the mostly exemplary work that he is doing — but such courses as he seems to have taken aren’t helpful. Last fall he commenced a campaign to unseat anti-Baker, radical right wingers from the Republican state committee. He fielded or endorsed approximately 57 candidates for the 80 state committee seats to  be elected at the March 2nd Presidential primary. Unhappily, a great many of his candidates were either Baker hires working at the State House or were existing state committee members hired for State House work. Is it any surprise that the opposition raised the spectre of patronage politics ? Raised it successfully enough to almost defeat the Governor’s campaign ? Nor did many of Baker’s candidates have deep roots in their district — some had only recently moved in; and many did not work the campaign the way you have to. State committee members are elected by State Senate District. To win  a state committee race you really have to treat it as a race for the State Senate itself. Yes, THAT intense. That means you have to want the job, you have to start running for it early, you have to raise at least $ 50,000, and you have to campaign full time everywhere; and you really ought to have roots in the district. Most of those Baker endorsees won who have roots and campaigned as you have to. Those who did not, or could not, lost.

Baker’s operatives would surely say to me, “but Mike, patronage people were all we had. There are so few cadres in our party.”

True enough. And that is the basic problem, the fundamental difficulty in all plans to build a Republican party in Massachusetts. If you don’t have candidates who want to win, and who can win, and who are prepared to do what it takes to win, you cannot even have a party, much less build it. And though patronage cadres are extremely valuable for campaign work, they’re usually lousy candidates. Voters understandably want representatives responsible to them, not to a patron. So, how does Baker find these ? Can he find them ? I am not optimistic.

And what if Baker, or a successor, were to succeed in building something stronger ? Immediately the election of Republican Governors would be put at risk, because our Republican Governors are elected by the activism of city and suburban Democrats, who can do this because the election of a GOP Governor does not in any way threaten Democratic dominance of state politics. That would not be true if our Republican party where large enough to threaten. If a Governor could build the Republican party to 25 percent or more of the vote, a thing most unlikely, Governor elections would look very different on the ground, but the Republican would surely lose, the election now being about partisanship rather than refereeing. And again : a local GOP cannot be built to the 25 percent of voters level without taking in the national GOP’s supporters. Which would make the GOP’s local difficulties worse, not better.

I do not know what Baker can achieve that will help rather than imperil his future. It would be nice to have at least enough activist Republicans, however, that his patronage, or his state committee members, aren’t amateurish, or bought and paid for, or both.

If you, dear reader, can think of a way to circumvent even one of these obstacles to growing the Massachusetts Republican party, I’d love to hear it. Until then, I accept living in political conundrum.