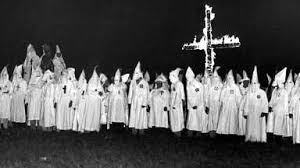 ^ compared to today’s anti-American word-poison terrorists, these guys were amateurs

In 1860, 12 states were willing to leave the Union for the sake of slavery. There has certainly been great political division since the Civil War, but actual anti-Americanism, when it existed at all, has retreated to the fringe. Even the Ku Klux Klan, terrorists and criminals, did not propose destroying the nation. Of actual anti-Americanism, only the Communist movement and various Nazi and neo-Nazi cults made any impression; and that impression generated almost universal citizen disgust.

Not so today. Hatred of the actual nation, of its political leadership, its agenda and its composition, has become the overriding rant of a very large minority of citizens. This we see in the Trump campaign. Who among us could have imagined, a year ago, that a campaign of almost universal insult and demonization of people, violations of Constitutional norms, and kudos for Vladimir Putin, could garner anything but a fringe support ?

We know better now. Trump has the toxics with him, he is himself a mouth full of syllabic cyanide.  Compared to him and his word poison terrorists of today, the Ku Kluxers were junior varsity.

Today what began as talk show hucksterism — saying outrageous things to get attention and thus advertising dollars –has become an agenda that millions voice proudly. It all begins, of course, with racial hatred; in that regard, the mindset of 1860 Rebels lives on. And it does. It was a fantasy then, a killer fantasy, and it’s a fantasy now, and, maybe, again a killer. People have died on its account, and many more have been assaulted, and even when Trump is beaten, the anti-Americanism and its racist underpinnings will not slink away. The persistence of talk show hucksterism assures it.

The one hopeful aspect of today’s pervasive, racist anti-Americanism is that it has almost no legs among younger citizens. Hillary Clinton leads Trump, in almost every poll, by huge numbers among voters under age 45, and by even larger numbers among those under 35. For every young racist, looking to get rich as a talk show troll, 600 young voters ignore and block.

When we stop giving the new anti-Americanism attention, it stops having legs. It becomes boring. It is, after all, only an attitude looking for a payday.

They will not go gentle into that long dark night; but go, they will.