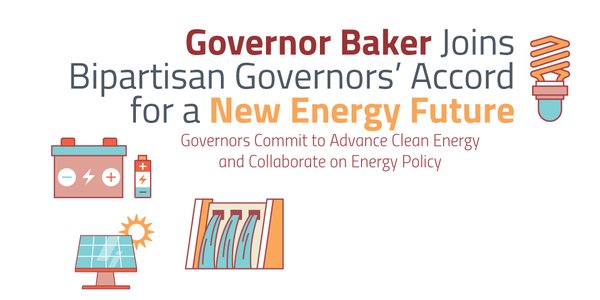 Two days ago, Governor Baker announced that he was joining with 16 other state Governors in an alliance entitled “Bipartisan Governors Accord for a New Energy Future.” The 17 Governors — 4 Republicans and 13 Democrats — came together for the purposes Baker outlined thus at a press conference :

“The Governors’ Accord for a New Energy Future highlights the tremendous opportunities to create a shared clean, affordable and resilient energy future. Massachusetts will continue to lead the way on clean energy, energy efficiency and the adoption of innovative technologies such as energy storage. These efforts, and our legislative proposal to bring additional hydroelectricity and other renewable resources into the region, will ensure we meet our ambitious greenhouse gas emission reduction targets while also creating a stronger economy for the Commonwealth.”

As Lieutenant Governor Polito added, “This Accord will allow us to collaborate with like-minded governors to create innovative clean energy policy and ensure a stronger national energy future. Joining the Accord reaffirms our commitment to diversifying the Commonwealth’s energy portfolio, supporting new energy technologies, and meeting our goal of reducing greenhouse gas emissions by 20% below 1990 levels by 2020.”

You can link to the Governors’ report here : http://www.governorsnewenergyfuture.org/governors

Energy reform is the matter of importance which, to judge by hits recorded at the Here and Sphere webpage, our readers care the least about. Yet matters boring —  so it seems — to most are prized by baker, because the less viral, the more Baker feels he can accomplish : and accomplish it with leaders willing to join with him regardless of partisan ties. That’s how Baker sees the public’s business being done most effectively. Whether we journos write it up or not.

Why have I written four full paragraphs about the Joint Governors’ New Energy Initiative  when the topic of this essay is “a fight” ? Because I think it’s significant to note Baker’s attention to issues that the common wisdom identifies as Democratic. For Baker, as we have seen, there is nothing Democratic or Republican about good reform : it’s just common sense. Committing to do common sense stuff has helped make him the best liked Governor in the nation.

You would not imagine, from hearing the ugly noise storms arising from the national election campaign, that common sense, collaboration, and doing the boring stuff would make Baker popular at all, much less very popular. Perhaps common sense is precisely what the voters want.

Yet the hard stuff remains.

Baker is moving to take over the Massachusetts Republican State Committee, whose 80 members, in 2014, voted a party platform anathema to a solid four out of five of our voters; a platform that embarrassed the Governor’s campaign and contributed to the narrowness (1.9 percent) of his victory. In 57 committee contests Baker has publicly endorsed a candidate, mailed letters to the voters, delivered fliers with his picture on them, put the full power of his popularity and his achievement on the line to make the GOP platform comport with his priorities and his positions on all the issues, including the social ones which are the chiefest dispute between him and those he seeks to defeat.

Were it not that a Baker victory in this fight has major implications for state government policy, I wouldn’t care much about it. For most state committee members, that office is their pet, their pride and joy, which they cling to for dear life; being on the state committee validates their activism. That the job of a state committee member is to help win elections, by recruiting appealing candidates and handing them an appealing platform, seems not to engage the majority of today’s state committee people. You read the words of those who Baker is working to defeat, and you learn that, for these folks, adherence to positions vastly unpopular with the state’s voters is the be-all.

One almost gets the impression that the Baker opponents want the party’s positions to be unpopular, often in terms as offensive as the positions, because the more voters they can drive away, the less chance of anyone defeating them for a state committee seat.

Baker’s challenges these folks existentially. He seeks not only their defeat but an end to small-party-ism. Baker wants the Massachusetts GOP to grow larger, even much larger, and he wants state committee members attuned to doing it and to guiding it in that direction.

He wants state committee members who will espouse issues positions that accord with what the overwhelming majority of Massachusetts voters want. You would think this would appeal to all his party’s activists; but you would be wrong. Read his opponents’ facebook posts, and you find a tone of hostility to Baker himself — and to his agenda. The anti-baker people say that they are responsible only to their District’s Republican voters. Huh ? No responsibility to the voters as a whole, whose votes will elect or defeat the party’s candidates ?

I know of no other political situation in Massachusetts where the idea that elections should actually be won is controversial.

Here we are, with the most popular Governor in the nation, and these folks are not only not giddy with joy but actually angry about him ? Logic cannot comprehend it.

And so Governor Baker, whose intends to win re-election and to elect more Republicans to office if he can, is in battle with people whose objective is entirely different, even opposite to his. No wonder the battle has become intense. There is nothing at all on which the two sides agree, or can agree; and Baker cannot afford to lose. If a Governor can’t command his own party — and a very small party at that — how can he command the state ?

March 1st is the day on which h this battle will be decided. Until it is, baker will be distracted from pushing major reforms forward. But that delay cannot be helped. Forcing the Massachusetts GOP to row up is itself a major, major issue, especially given the sickening mess going on in the Republican party beyond our borders.