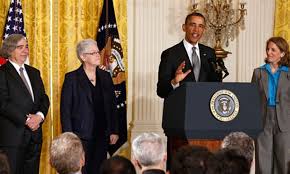 ^ President Obama will nominate a Supreme Court justice — and the Republican Senate will likely reject them all. Very bad portent for the nation’s future

There is no justification whatsoever for the notion that the President should not nominate a successor to Justice Scalia, and do so with all dispatch. The power is expressly granted him in Article II of the Constitution.

Two duties are granted. First is “advise.” What is the senate to advise the President ? Advice is often given; nothing in the Constitution — or in the history of advice — requires the person advised to accept the advice given.

The Senate is also granted power to “consent.” What is consent all about, and how is it done ? The custom here is to hold hearings at which the nominee is questioned, and then to recommend his or her confirmation, or not. Consent need not have been this formal. A simple voice vote would do. But the custom here has become the expectation.

The Constitution offers no guidance for what matters the Senate should take into account when exercising the consent power. The case used to be that a Presidential nomination was given the benefit of the doubt, and, qualification being established, no consent would be withheld. That changed in 1987 at the hearings given to Robert Bork. Now the nominee’s judicial philosophy is also subject to consent.

This is, in my mind, a deplorable development. It ensures that partisan political battles will override the Court’s intended insulation from  politics. Lifetime appointments were given to Supreme Court Justices for that very purpose : to assure that they would not be vulnerable to political pressures. Instead, we now have a political Court.

The Court can NOT be a mere extension of a partisan Congress and President. If that is what it is, it might as well not exist at all.Indeed, on vitally important matters, it does not in fact exist. Significant blocs of voters — even of whole states — refuse to recognize its rulings as the law of the land.

Operating a Court thus delegitimized, the current Senate has for some time now declined to act on Presidential nominations, especially to judgeships. By doing so, the Senate has made it more difficult for the Federal government to operate at all. this has been, for the Republicans, what they want ; no operating Federal government. We have seen the result : progress and decision has devolved to the states and cities. America is reverting to the disunion existing prior to the ratification  o the Constitution. this too has been a matter of conscious policy for national Republicans : profess “loyalty” to a Constitution that you are, in fact, working to negate.

This sneak attack on our Constitution has worked up to now because the public has not seen it much, or for what it it is. The sneaking can no longer work because a Supreme Court nomination is a big deal with all eyes firmly focused on it. If the Republicans dare to apply their negation tactic to a Presidential nomination, they will surely lose, because, I dare say, very few actual voters want to see the Constitution negated.

My guess is that the Republican senate will see that it cannot simply refuse a vote on this Presidential nomination. But it can vote the nomination down, and it will likely do so. After all, why grant legitimacy to a Court that is not a Court at all but a partisan political plaything ?

I reject this situation. I say ‘vote a reasonable nominee and confirm him or her, and do so with some dispatch. I think that most Americans agree with this.

To do otherwise, as the Republican Senate will probably vote, is to continue the devolution of American unity that they seem to want. It is to aggravate the formation of two very separate Americas in which two very different arrangements of society are being bricked into place. one America, a place of diversity and inclusion, of civil rights for all, a place in which all religions, or no religion, are granted equal tolerance but no dictat upon public policy. the other nation, one in which a certain religious view is impose on everything, including the law, even at the expense of equality, civil rights, and Constitutional protections which, in this other America, are not granted any loyalty or legitimacy.

Such being the stakes called up by the ensuing Presidential nomination, I expect the Senate to reject anyone and everyone the President nominates. By doing so, they will reap the violent retribution of a seditious vengeance that they seem ready to evoke. It is a sad moment in our often sad history as a nation unsure of itself and often averse to its noblest mission.