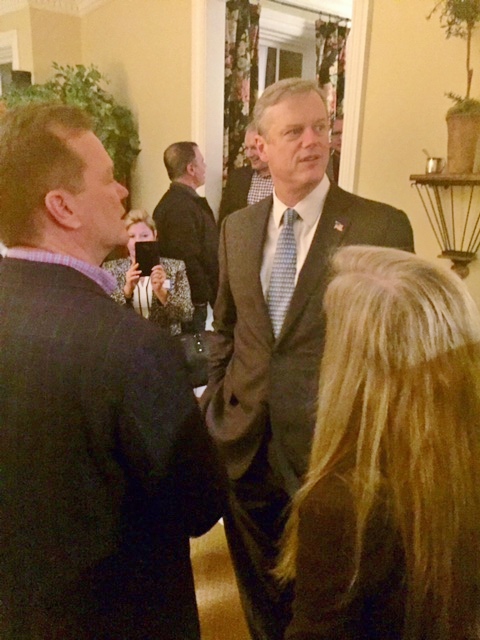 ^ “we must all move in the same direction” : Governor Baker as GOP party leader, speaking last night at a meet & greet supporting two of his 55 state committee candidates

Right now, a new Massachusetts is being created  by two political men : Mayor Walsh of Boston and Governor Baker. As E. J. Dionne points out in his eloquent review of Nick Littlefield’s memoir of Ted Kennedy, his late boss, leadership means having a clear idea where you are going plus the dogged political skills to get there. Kennedy had both, was a master of them. Much the same could be said of Baker and Walsh.

They have almost no competition against them. Almost all the political attention these days is on the Federal government in Washington and on the loud shouting filling one’s ears about it. As a result, Massachusetts as an arena of politics has been all but emptied, leaving Baker and Walsh free to fill state and city with what they want.

Walsh faces desultory opposition, yes; but only in the matter of the 2024 Olympic games did that opposition find critical mass. Walsh has learned from his mistake and is now advancing big, big changes one little step at a time, steps all but invisible and hard to see as important even when seen.

Baker’s reforms of state governance, by contrast, are unveiled to great press conference fanfare. They are major and have huge implications for how Massachusetts is governed, yet they elicit scant objection because, as Baker says, “the work we’re doing looks boring.” Exactly: being boring, in the arena of reform, is part of Baker’s political skill. Baker must smile when critics say he has no big vision, or that he only attends to little fix-its. Do they not see that attention to detail is crucial to the reconfiguration Baker is bringing to the entire discussion of how Massachusetts should work ?

Walsh is a Democrat, Baker a Republican. Here I see a difference between the two men. Reforming the state’s Republican party is an integral part of Baker’s reform of state government – I will explain why a bit later in this story. Walsh’s remaking of Boston, on the other hand, has little to do with Democratic party affairs. This, too, requires explanation. Let me begin with Walsh and the Democrats.

In Massachusetts, Democrats make up about 36 percent of all voters, but party members hold almost three quarters of elected offices — and in Boston, all of them. Whatever “Democrat” may mean in the loud national shouting match, in Boston it simply means that you’re an activist — nothing further. Walsh and his opposition all belong to the same political party, and thus to no party in the reform of Boston fight. The business and labor partnership, and the business and education collaboration, that Walsh is putting in place have nothing to do with who will be the next President. Nor does Walsh ever justify, or argue for, his major reforms in terms of Democratic party direction. Nor need he. Boston elections are nonpartisan.

On Beacon Hill, almost the same ubiquity of Democrats prevails despite elections therefor being by party. Thus party identity matters hardly more for legislators than it does for Walsh, and one hears, at Democratic party gatherings, very little talk of policy or agendas when state, not Washington DC, is the topic. Democrats, outside the Boston core, do not seem focused on state elections, or geared up, or very sophisticated about the tasks of electing. And why need they ? Whoever of them wins, it will be a Democrat, whether the campaign be skillful or not. A recent forum that I attended, in the contested race to choose a state committeewoman from the Salem-Peabody-Beverly-Danvers District, neither candidate gave much of an answer to the question, “what does a state committeewoman do ?” How could they ? A Democratic state committee member mostly stands aside and watches her district’s dozens of Democratic candidates for office battle it out.

In the Republican party just the opposite holds true. Republicans make up about 11 percent of Massachusetts voters. A small party must prioritize, and in our state, that has meant, these past 45 years, concentrating all forces on electing a Governor. This dynamic has always been present; but Baker is taking it further. Just as he has moved to reform state administration toward effective, accountable work, so he is demanding the same of the Republican state committee. He is actively supporting 55 candidates (out of 80 total districts) under the rubric “we need to all pull in the sane direction.”

By which Baker means, support his agenda and be a ground game for his re-election. He doesn’t say that his opponents have advanced agendas different from his, even opposed to his, but the clear implication is that he sees these as obstacles to his success as Governor. He is right. Republican activists feel the push of the national party’s limitless rejectionism; but Baker cannot afford to be a radical rejectionist. Nor is it his style. Unlike Mayor Walsh, who sometimes lets his passion for change get ahead of him, Baker is the most disciplined, most skillfully cautious leader I have seen in decades.

His takeover of the Republican state committee is, however, anything but cautious. It’s a big gamble. He will probably succeed — though the 200 people he attracts to meet and greet events for his 55 candidates are far outnumbered by the 6000 to 12,000 voters who will take a Republican ballot in each of the 40 committee districts. Most of these voters will know nothing about what a state committee is or does, and not much more about the candidates — except that the Governor with a 75 percent favorable rating wants them on his team.

Still, the opportunity is there. His opponents have scant power; he has a lot. And Baker’s takeover campaign offers large rewards. If he can convince rank and file Republican activists to be socially progressive, fiscally disciplined reformers, as he is, no matter what their predisposition may have been, he can plant and grow a Republican culture vastly different from the national GOP, sparking maybe hundreds of legislative candidacies — for decades to come.

More likely, however, his work will merely confirm, for decades to come, the long standing position of the Massachusetts GOP as an organization deployed for only one purpose : electing a GOP Governor. There are many structural reasons why that purpose works with all Massachusetts voters. Reforming these structures involves risks Baker would be verfy wise to avoid.