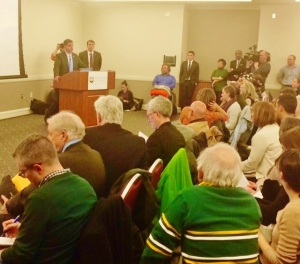 ^ Mayor walsh at an Olympics hearing : did we elect him to lead with bold leadership or to be Jeeves ?

—- —- —- —-
Clearly the Bid Committee that proposes to bring the 2024 Olympics to Boston did not anticipate that it would face opposition, much less the firestorm of vitriol that has befallen it.

I suspect they imagined that this most sports-minded of cities would take to the Games as it has taken to the Patriots, the Bruins, and, in good times, the Celtics and Red Sox. This expecation was not a foolish one. Why, then, did the opposite come to pass ?

Three situations come to mind.
(1) As the project of a business elite backed by City hall, the Olympics Bid became a third rail for all those who distrust government and business leaders — “not the job of millionairs, private corporations”, as one prominent, Left-leaning critic of mainstream policy put it to me (2) over the past 50 years, development projects in Boston have become ever more subject to what we call “community review,” meetings at which only opponents of a proposal show up, where they can nitpick, delay, and thus kill every proposal that seeks to change things.
(3) the Bid Committee did not expect that what for it was a first draft would be taken, by the mdedia and opponents, as a final edition.

The second and third factors overlap. Every development does cause a ripple in the mindset of neighborhood equilibrium; and if one six-family residential project is occasion for 60 people showing up to quibble about shrubbery or what rent price to set– an everywhere fact in Boston civic life — it should have been easy to anticipate that a development as massive as the Olympics would cause pandemonium in no-change circles; and easy also for the Bid Committee to have foreseen that releasing a first draft, very sketchy and full of poorly researched details, would pour sulfuric acid into the souls of anti-change folks.

Perhaps the Bid Committee assumed that because its leaders are also major Boston developers, accustomed to winning over “community review” thing-ies, they would be accorded respect and room for initial error. They were wrong.

When crunch time came, supporters of the bid compounded their misread. Instead of thinking through about why opposition arose on both the far Left and the entire Fight, they called upon political leaders to endorse the Bid. If your opponents oppose you because, basically, they don’t trust government leaders or “millionaires and private corporations,” adding more of these to your Bid team simply confirms that The Mark of Cain is what you are.

As it happens, the opponents of Boston’s Olympics Bid were few, only the far Left in Boston and the anti-tax Right in the Route 495 region; but what they lacked in number they made up in decibels. They were very loud, and very disruptive, and many in the greater public got the impression that the Olympics Bid was a crazy show run by circus promoters hiring a bevy of ill-mannered pie-throwers : hardly the image wanted !

If the brickbats and insults being hurled by “NoBo’s” at the Bid Committee’s “millionaires, private corporations’ and political machers were strictly a Boston tornado, there’d be not much more to say. But as we have seen, protest against big government and big corporations has become the prevailing weather pattern. Government in America has become the plaything of a most anrchic el nino.

From the vigilante guns of Cliven Bundy to highway-blocking by radical Occupyers, there is a whole lot of weather out there tending to tear apart our citizen democracy.

If elected leaders are not elected to make bold, comprehensive decisions, what are they elected to do ? Be a kind of Jeeves ? That won’t get the job done, because, for example, it’s the mayor of Boston’s job to take the entire City ito the future — a future that will take us if we do not take Boston to it.

The same thing nationally : If the President can’t have executive wiggle room to take necessary steps, as he has recently sought on matters of immigration, wages, and trade, it isn’t just his record that suffers, it’s the nation’s.

The world is moving fast. It will be moving faster still. We in America have been gridloocked for a decade now. Meanwhile China, Southeast Asian natiions, and even Dubai and india have moved fast and efficiently, commanding new businesses and inventing networks of commerce, education, and knowledge. These nations are not impeded by the delays of a democracy.

These forces will not be deterred by a failure of public planning. They canot be denied by NIMBYing. No union, lashed to the mast of old systems created for bygone sitautions, can stop them. The new economy is already here, transforming every block of our City even if we cannot see it.

The Olympics bid rides this tidal wave. I think the committee sees that now. That the bid has put at issue whether Boston’s leadership has legitimacy to get things done, or does not have it.

The Bid Committee understands that Governor Baker is watching g. Nothing now but a thorough, detailed ground-up plan will pass muster.

Upon a positive answer to that challenge, and the larger question, depends our ability to move our city forward by means of government.

Some have said that the Olympics will benefit only contractors and unions. This is false. Hosting the games will benefit the hotel industry, transportation businesees, restaurants, entertainments, retailers. It will even benefit networking, in real time with people from all over. It will force us to reimagine how Boston feel, smells, sounds, its shape and its dimensions. Reimagining all these, we will be that much more able to reimagine our economy, employment, housing and education. Add to all this a $ 15.00 hourly wage for service workers — a policy initiative that I fully support — and we will have a very different City from the Boston of now.

The huge planning effort required by the 2024 Olympics bid will put Boston leaders at the forefront of the change. We’ll have a circle of knowledge about how to do it, and as a City we will all gain the confidence to create the next Boston.