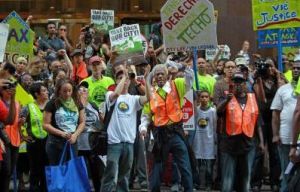 NOTE : this story is Part One of a Two-part Series on Civil Rights Injustice in Today’s America.

So many civil rights denials occur every day in our struggling nation that it’s almost unfair to single one of them out as “the.” Yet that is what we face. We know right now — should have known all along; why didn’t we ? — that bad police are the single most crushing civil rights problem this country confronts.

Confronting, indeed. From Ferguson, Missouri to New York City, from Cleveland to the Carolinas, and at various places in between, one bad police event after another injure our attention.

Some of these bad-police incidents seem the result of mistake. Some can be explained by the event itself. Many others, however, defy justification. There is none for such as the shooting, in Cleveland, of a 12-year old boy with a toy gun; for the chokehold killing of Eric Garner, in New York City; for the tasering of a boy named Bryce Masters — an event that has gone viral on social media; for the beating up of a woman in a Texas town jail by officers at that jail. Nor can there be anything but punishment and Justice department takeover of the Cleveland, Ohio police force, callousness run rampant, evidently, through the entire department.

Many of these bad police events are racial. Clearly many police departents view people of color as suspects simply because. The phrase “driving while black” became famous for a  reason ; drivers who are of color get stopped far, far more often than white drivers. People of color get harrassed almost no matter who they are. Can we forget the Cambridge cop who arrested Harvard Professor Henry Quarles a few years back for breaking into his own house (because he had forgotten his door key) ?

Quarles is a man of high influence; he knows the President, and the Pres8ident came personally to Quarles’s defernce. Black citizens who lack such clout have no kind of luck.

Over and over again, Black citizens are stopped by police, harrassed, even abused, occasionally injured, sometimes shot and killed. Who can forget the cop who, in North Carolina a few years ago, killed a Black college football player who had been in an auto accidernt and approached the policeman for help ?

In that case, as in the matter of the woman punched in a Texas jail, prosecution followed. So too has NYC prosecuted bad police, sometimes successfully. Yet for every such success far more cases never have consrquences. We are stunned — as we should be — that a Staten island grand jury just this week refised to indict the NYC cop who put Eric Garner in a chokehold and killed him, an event fully captured on a clear, gruesome video.

As the Garner tragedy shows, Black people are also far more likely to be arrested for minor matters. Garner was selling loose cigarettes ! Why did that “crime” demand an arrest at all ? Most police forces would have simply cited him a ticket to appear in court. (It is said that neighbors complained about Garner. Does that justify his being arrested rather than cited to court ? I think not.)

The Garner matter will now be investigated by the Federal Justice department, as the Cleveland police department has been and as that of Fergiuson, Missouri is now undergoing. This comes none too soon.

The Justice Department should conduct a review of the parctices and culture of every major city police departement in the nation. If it finds a pattern of infraction, it should bring civil rights cases under Title 18 — laws that exist for a reason.

Police departments must hire officers of color. The department must “look like the neighborhood it serves,” as progressive Mayors now phrase it.

Police departments must rigorously train new officers, review its officers’ adherence to rules of engagement, discipline those who violate these rules, prosecute when warranted, dismiss from the force officers who do not conform. Nor can a police department make excuses for officers who break the law.

Too many police departments view their situation as “us against them.” That must change. The police must see themsleves as both us and them, exactly as do the rest of us.

One further point. We the people are right to protest these violations and to do so vigorously, passionately, But blocking highways and public transit, or shutting down shopping malls, is not at all part of rightful protest. This movement needs the public’s support. It has no business making life difficult for the rest of us. Keep the egos in check, lose the moral contempt, and focus your eyes on the mission.

TOMORROW : THE CRIMINALIZATION OF POVERTY : FOR PROFIT