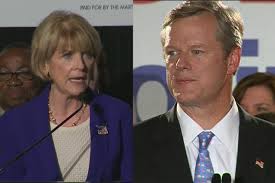 ^ Coakley : “I see people, not numbers.” It’s a line powerfully reminiscent of Scott Brown’s “it’;s the people’s seat,’ a line which clearly taught Coakley a ;lesson

With this line, given to her by Governor Patrick, whose persona it is, Martha Coakley has taken her campaign to the high ground, the vision ground, upon which the governor election will be decided.

Meanwhile, Charlie Baker, whose campaign all summer long and for a month after, occupied, even defined, the vision ground, has lost his message and finds his campaign hogtied by charges and counter charges about stuff that has nothing at all to do with his message — or should i say, what his message ought to be.

I’m not sure, the more I see of Baker’s actual campaign on the ground — who he talks to most readily, who he draws to his events, how he sees the state, his bartender stints, the Cellucci-like ethnic appeal of running mate Karyn Polito, that Baker doesn’t live, politically, in the early 1990s; doesn’t understand that Massachusetts has changed enormously since. Baker’s message of low taxes, small business tax breaks, and welfare reform carried the day.

For the past eight years at least, the GOP brand has lost whatever force it had for most Massachusetts voters and is today a non-starter. the only way for a Republican nominee to run is to cast the party’s distrust of people entirely aside and go for broke on high-minded reform : “I see people, not numbers.”

It’s also a strong connection to the female voters who are Coakley’s base. just saying…

Baker — or his advisers — do not seem to understand that today, Massachusetts is a values voter state above all, and that our values have developed a passionate core formed in opposition ton the values enunciated by the national GOP.

I read in today’s Globe that baker has amassed a superb, state of the art data bank to arouse Republican-minded voters on election day; a data bank which, he resolves, will get him the votes that didn’t come to the polls ifor his 2010 run. that’s all well and good; a candidate needs have aground game.” B8t if baker’s bottom line is to ra8ise his vote total rather than expand his message to encompass forward-looking reformers, he disappoints the hopes of those who see him as a man of the future, not a return to the past.

Yet Baker’s  potentially winning message — of bold transformation of state administration — can carry Massachusetts values very well indeed as long as he makes all-in clear his dedication to people, people, people. He says that he doesn’t have a “compassion deficit,” and often during this campaign he has proved his caring about people. But there’s plenty in his campaign plan, and in his talk about taxes going down, to let voters think that he is indeed the “numbers guy” that coakley says he is.

Only if voters feel confident that Baker won’t cut state agency budgets to the bone — as Bill Weld did in the years that formed Baker’s political life; won’t blame public assistance recipients for monies handed out by agency incompetence; won’t give workers seeking better wage packages half a loaf when they want, and — as I see it — deserve the whole loaf — only then will Baker win the political room to talk about budget numbers.

Perhaps I’m leaning too hard on Baker. his campaign has always had huge obstacles to overcome — barriers far bigger than the ones facing Coakley. She has only to convince people that she isn’t the vague, even passive place-seeker that she appears to be, and that she can be as charming as charlie. baker, on the other hand, has had to — felt the need to — appease a Republican electorate half of which haters everything that Massachusetts is and to convince “independent” voters — our state’s majority — that he will stand up the entire apparatus of Massachusetts party politics, even as he works to win the votes of many who prosper by party politics. And he has to do it while carrying a party label that most Massachusetts voters viscerally dislike. Maybe only a miracle man can accomplish the mission that Baker has accepted.

He can still win it. Martha Coakley remains greatly distrusted by many activists, disliked by even more. the state’s Democratic party is, as we all know, far too satisfied with itself, deaf, on Beacon Hill, to opinions other than its own. Inefficiency and incompetence go unaddressed by one-party rule of everything; and because of it, the people of Massachusetts lose out. yes, the people, even more than the numbers.

Baker should make that point. If the campaign is going to talk about people, people let it be : not only what people ant state government to do but also what state government does not do that hurts people. On that ground, Baker can win, and should. Whether he will take this message up or not, we shall soon see.