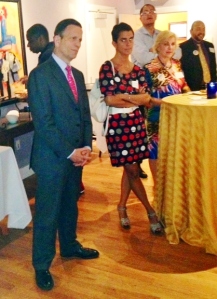 —- —- —-
For GOVERNOR : we endorse STEVE GROSSMAN in the Democratic Primary, CHARLIE BAKER on the Republican ballot.

Grossman is simply by far the best prepared on almost every issue, with a long record of achievement in business and Democratic party service and, more recently, as our state Treasurer, where he implemented a number of innovative and progressive reforms. Grossman would surely continue massachusetts’s social and economic progressive momentum, without reaching too far too fast, as has Don Berwick, and with far greater precision than the often vague, non-committal Martha Coakley.

or the Republicans, CHARLIE BAKER  is, in ouir opinion, the most accomplished administrator, and state government badly needs expert administration and reform top to bottom. baker also advances a reformist agenda in economic fairness, social service reform, and criminal justice rethink. He is surely the candidate best able, as Governor to realo with House Speaker Robert DeLeo on terns of reasonably equal power — which matters, because otherwise the Speaker can roll over a governor less engaged or less politically potent.

For LIEUTENANT GOVERNOR : in a Democratic field distressingly weak with unknown candidates — remember, the Lieutenant Governor can become the Governor and often has — , STEVE KERRIGAN has shown at least some political clout and certainly some political smarts. He’s our choice.

KARYN POLITO is CHARLIE BAKER’s running mate and by far the strongest Lieutenant Governor candidate on Tuesday’s ballot in either party. A former Shrewsbury selectman, businesswoman, and many-term state Representative, she is fully qualified to be Governor of the case arises. 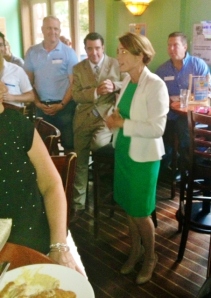 For ATTORNEY GENERAL : Democrats get lucky here. Both MAURA HEALEY and WARREN TOLMAN have terrific capability and have shown it; either one would be an outstanding Attorney General. Our choice goes to MAIRA HEALEY because she has unmatched forensic skills, takes a more people-oriented view of the office — many candidates seek votes, but few get the people part of it as well as Healey does — and has learned to be flexible on issues that all too easily trap candidates in rigid positions. Nonetheless, the more reserved Tolman would surely grace the Attorney General office were he to win on Tuesday, and our endorsement of Healey is a close one.

For TREASURER : THe Democrats have three to choose from, the Republicans only one. Thus MIKE HEFFERNAN will be the GOP nominee, and he will, we hope, face DEB GOLDBERG, of Brookline, a woman from a family of great means (they owned Stop & Shop) who knows big-money finance well, both as a businesswoman and as a Brookline selectwoman, and promises the kind pf patrician, high minded public service that used to be the norm in Massachusetts governance. TOM CONROY, a state representative currently, has better professional credentials in finance, but Goldberg’;s unique resume (and wide financial real world experience) appeals to our vision of diversity of office holder backgrounds.

We hope you will give our chosen candidates your enthusiastic consideration.