Having former Governor Mike Dukakis moderate its Governor Forum was probably not the Dimock Street Health Center’s wisest decision. The obvious affection displayed by most of the Forum’s attendees toward Dukakis did little to enhance the seven actual candidates on its stage.

Nor did Dukakis’s own performance save the day. Gracious as was the now grey-haired elder to his admirers — chatting with them from the podium — his banter took up much of the Forum’s time and dissipated its seriousness. During the Forum questions themselves, the “Duke” frequently interrupted candidates’ answers; when not interrupting, he often complained that his questions weren’t being answered. He even injected an agenda of his own : the “Duke” made clear that he is very, very much not a friend of big health care institutions and what he called “:the system.”

From all this, one who did not know better might easily have concluded that Dukakis was the candidate, the actual candidates more or less his focus group.

Clearly seven would-be governors cannot match Dukakis’s two terms as actual governor, not to mention a stint as Democratic nominee for President — a 1988 campaign that he mentioned in his opening remarks, further downgrading the impact of Don Berwick, Martha Coakley, and Steve Grossman, not to mention Republican underdog Mark Fisher and all three of the non-party candidates whose names will be on the November ballot. 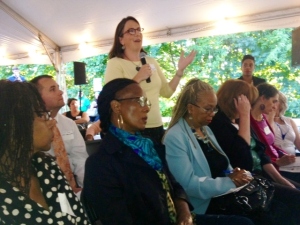 ^ questions were taken from attendees too

Still, the event was a candidate Forum, and many questions were asked of the seven. So how did they do ?

Independent candidate Scott Lively won some sympathy by citing, at the outset, his successful rise from drug addiction but utterly lost that sympathy by calling Obamacare “socialized medicine.” the audience booed him loudly. Lively extolled the success of the non-profit health organization he belongs to but had no answer for what he would do if he incurred a $ 90,000 two week stay at MGH, nor did he express the slightest awareness that being Governor is not about being Scott Lively but about serving six million people of vastly varying economic and social situation.

Another non-party candidate, Evan falchuk, asked several rhetorical questions along the lines of ‘why can’t we do better” on may health care related topics but offered few policy points that might actually get the state to “better.” He seemed to agree with Don Berwick’s single payer initiative, and he probably supports greater funding for community health ceters like Dimock; but his support came in the shape of a suggestion, not a commitment.

The third non-party candidate, Jeff McCormack, emphasized that health care in Massachusetts needs co-ordination between patient, provider, and doctor, a co-ordination which, so he said, the state doesn’t have and which lack costs us hundreds of millions of dollars in misspent money and duplication of effort. The point may well be true; but mcCormack did not suggest administrative steps that would create that co-ordination.

Mark Fisher touts his Tea party affiliation, leading one to expect anger; but on the Dimock stage he was genial and gentle, often humorous, a soft-spoken man who did his best to find some good in our state’s universal health care. Fisher even expressed a liking for parts of Obamacare — it took Steve Grossman, of all people, to say that we should have gotten a waiver : to which remark fisher responded, :there’s a place for you in my administration.” Nonetheless, Fisher insisted that competition is the key to reducing the costs of Massachusetts health care. 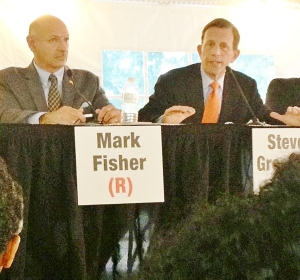 All of these men sounded more like private citizens than like candidates. None, even McCormack, seemed to step outside their own personal life experience and to grasp that Governor is an office responsible to millions of people and dozens of policy initiatives. None mentioned legislation or the legislature. It was thus left to the three Democrats on stage (Charlie Baker did not attend) to do so. To a varying degree, they did that. 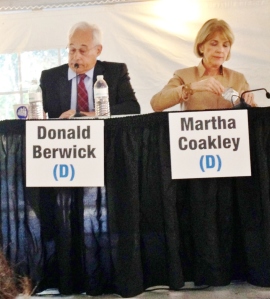 Don Berwick had the easiest task. He is a doctor himself with a life career in medicine and its administration, and at health care Forums his mastery of the field is evident in every phrase, sentence, paragraph. As health care consumes 42 percent of massachusetts;s entire state budget, Berwick’s concentration on it is not narrow : it’s almost the whole thing, and at the Dimock Forum he delivered several pieces of a whole ; single payer system to reduce costs and simplify delivery of health care; payment processing reform by digitizing the entire process; and investment of the millions of dollars saved into community hlth organizations like Dimock itself. He was cheered loudly and often, and no candidate was eager to controvert him.

Steve Grossman usually expresses amazing mastery of every issue, but he could not match Berwick’s knowledge of health care, and it showed. grossman’s answers were less precise than hi s usual and less knowing than Berwick’s. He also often sounded like Mitt Romney : talking about small businesses being “job creators’; and promising to cut their health care costs. On two points he scored bigger than Berwick : first, he suggested freezing construction of prisons and using the money saved for community health organizations; and second, he proposed that for all medical school graduates, the state would wipe out their student debt if they would commit to serving five years in primary care medicine. Grossman was cheered loudly both times.

Martha Coakley almost always sounds flexibly resasonable without being palpably precise, but Steve grossman attcaked her support, as our state’s attorney geberal, for the Partne4rs Health care merger (and Dukakis piled on, expressing his distaste for a system already too big ber omg even bigger). Grossman’s attack left Coakley no choice but to fight back, and she did so, outlining in lawyerly fashion the bses for her advocacy of the partne4rs metger : the largest reason being its potential cost savings. Though Coakley garnered far lesss applause from the Dimock audiece than eityher of her Democratic competitors, her rebiuttal was greeted well enough.

Grossman makes a big mistake attcking Coakley on matters lrgal, all of which she knows authoritatively as attorney general. Charlie Baker should pay close attention and resolve to avoid Grossman’s recklessness. That day is coming. the democratic primary takes place in 19 days.