Truth is a risky word for an organization to name itself. Who knows the truth ? At best we can approximate — maybe. So there I was, last night, at Madison Park High school, where a new “Boston Truth” coalition, with at least 200 people on hand — held its first “discussion session” on how to achieve its stated objectives as set forth in a four-page brochure from which I will quote from time to time as I write this report.

200 people meeting on a wintry night made an impressive beginning. As one of “Boston Truth”s key organizers is a dear friend, I was glad for her, proud of her part in the accomplishment. On hand were many Boston Teachers Union activists, students, retired teachers, union organizers, some members of the press, and two political figures at least : Eric Esteves of the Boston NAACP, who intends a candidacy for State representative from the 7th Suffolk District (in which the meeting was held), and Marty Keogh, who ran for Boston City Council this year and finished seventh.

The meeting began with several public school students advocating — from scripts provided them — one or other of Boston Truth’s stated goals. “Public schools are public institutions,” for example; “Our voices matter,” spoke another. A third pupil recited : “strong public schools create strong communities.”

It seemed odd to watch students speaking mission statements scripted, but there they were. They very much enjoyed themselves. One after another they spoke, were applauded; then all took stage together, holding their placards, applauded by all, photos snapped.

The meeting divided into discussion groups of six or seven to a table; I joined the group that included Marty Keogh — he seemed the most likely to say something quotable. This proved not easy to get to, however; it wasn’t made clear what we were to discuss, or what conclusions our “discussion group” was to come to — there wasn’t an agenda, and the table monitor of my group did not impose one. People were reluctant to speak. Two women offered school-parent and teacher experiences; everyone asserted approval of the brochure’s goals. We were getting nowhere fast.

So I decided to speak up. “There isn’t a thing in these stated goals that anybody would disagree with,” I said. “What the City is arguing about right now is, how do we get there ?” A lady sitting two to my right responded. “We need equity,’ she said. “Schools shouldn’t have to compete against one another.”

“In that case,” I asked her, “How are parents to tell if their kids are receiving the education they need ?”

“Oh they can tell,” the lady answered me. “they get a feel for what the climate is. A rigorous curriculum. Parents can tell.”

In other words, parents DO judge schlools competitively.

I then opined that (1) the biggest issue facing schools — the acculuration that kids receive, or don’t receive, at home — is beyond the power of any school to control and (2) one way to encourage the parents of school age kids to focus on home preparation is to have strong PTAs — these were Boston Schools’ glory, back 50 years ago : now, hardly at all. At this assertion Marty Keogh finally spoke up and spoke well : “school assignment designations need to change,” said Keogh. “You can’t have a PTA if kids are transported all, over the city, parents can’t drive such distances to do PTA. Need neighborhood schools !”

Keogh even addressed the issue whence arises school competition — exactly as I had hoped. “Testing ? Yes, testing,” he said. “we need some way of deciding if a school is performing.” He and I discussed the matter — we were getting somewhere, at last. 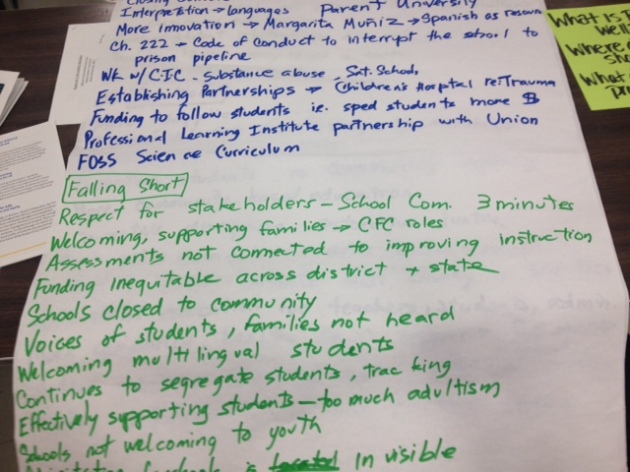 Other than Keogh’s unscripted discussion, the meeting, as far as I could tell, dedicated almost all of its words and energy to assertion, not discussion. it was more a rally of the already convinced than a session for persuasion. Everywhere in the room were “BTU” campaign buttions, BTU literature, workers’ rights handouts, organizing fliers. That’s fine if you treat school reform issues as a job action, not a policy debate. But a job action will not do anything to move the debate toward even a partial consensus. It doesn’t seem to me, from last night’s talk, that the BTU, especially, has moved one inch off its insistence on its own program of school future: no competition among schools, no change in evaluation systems, no change in work rules, less testing of kids, of teachers, of principals; and full funding for all schools regardless. All it has done is to gain allies, mostly from union organizings and union-friendly school parents.

Tonight Mayor-elect Marty Walsh holds HIS Schools reform town hall meeting, at English High School in Jamaica Plain. it will be interesting to hear what his transition task force on eduaction has in mind that can move the discussion beyond stand-pat. 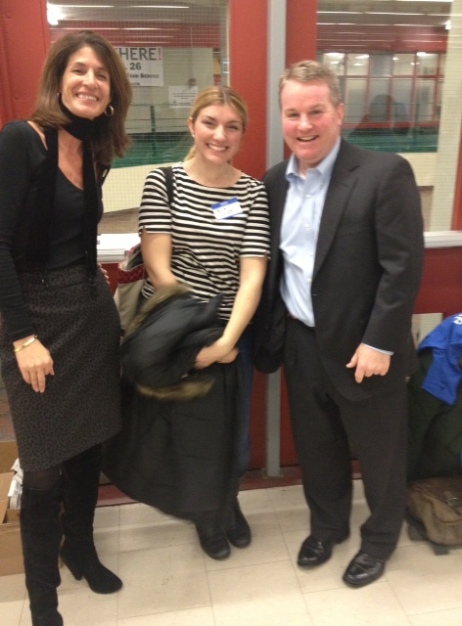