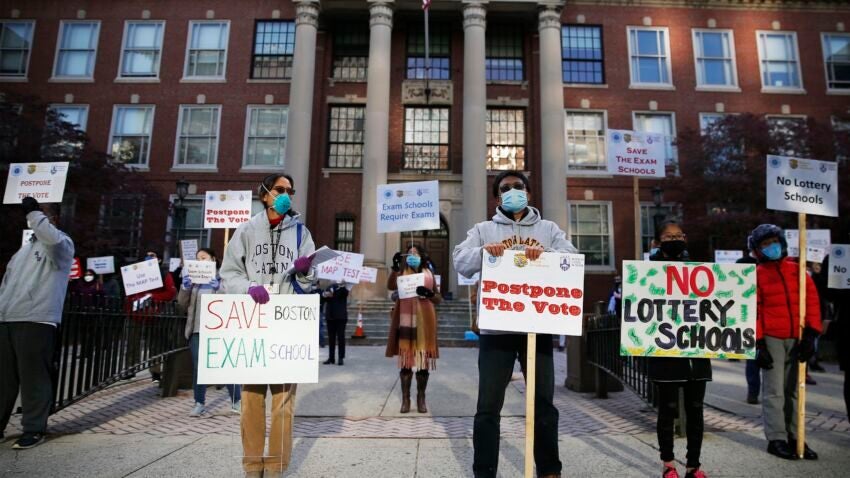 Boston’s School Department is proposing to apportion admission to Boston Latin, an exam school, by geography. We oppose this plan. (You can access it HERE : file:///C:/Users/Customer/Downloads/Exam%20Schools%20Admission%20Criteria%20Recommendation%20to%20SC%20FINAL(3).pdf

The only criterion that an exam-admission school should honor is excellence. Is that not the whole point of having admission by exam ?

Proponents of geographic admission say that exams disadvantage children of color. I disagree. Kids taking the exam, in the sixth grade and again in the ninth, have presumably attended Boston schools for years. If some come to the Boston Latin exam less prepared, is that the kids’ fault or the school system’s ?

Perhaps some fault rests with the parents. Let us not assume that, however. The parents of any kid aspiring to examine for admission to Latin know full well what is going to be asked of their kid. Is there a parent, of whatever skin hue or national origin, who does not want her kid to ace that exam ? To suggest that any parent faces the exam challenge slack is to condescend grievously.

My own parents pushed me very, very hard when it came to school performance. My Mom — youngest of six children of a penniless immigrant, East Boston tenement family –worked a full time job at a Boston newspaper, sometimes bringing home the next day’s edits and staying up till two AM: yet she had time to go over my reading with me, and my math, and my geography, so that when it came time to take the SAT high school admission, I would be prepared. My Dad wasn’t able to help, as he was a house doctor often making house calls at 3 AM (for $ 3 and $ 4 a call, if the patient even had any money) and then getting up at 8 AM to take my Mom (who did not drive) to the train station.

My Mom had a saying : “if you want something done, ask a busy person.”

I suspect that most of today’s immigrant and dark skinned parents know and follow that rubric. I have such a parent in my own extended family; and though she has enormous issues in her own life, she stops at nothing to push and prepare her kids for school excellence. Her older daughter is now attending University on full scholarship after getting all A’s in high school.

I think it is therefore a terrible injustice to push Boston’s school system’s failings onto the backs of families who live in under-achieving school districts.

This is not to say that geography is irrelevant in exam admissions. I went to Princeton,. and that I came from Massachusetts, not New Jersey, was a factor in my admission (although I also had the grades needed.) Princeton very much wanted to admit students from, say, Idaho or overseas; but if geographic diversity was desirable, it did not overrule or even qualify scholastic excellence. Admission was done by a point system : exam excellence, 5 points; school grades, 5 points; extra curricular activism, 3 points; legacy, two points; geography, one point. I was not a legacy, but I did have most of the other points and so was admitted as a 13 out of 16. ( Today a 13 out of 16 might not be enough ! )

All of the above said, my view is not the be-all. There are other views, of actual Boston school parents embroiled in the matter, that deserve our attention. Here’s what one parent — a personal friend — said on facebook this morning :

They don’t have a friggin test and because BPS was misusing it. The affluent have tutors for a year out sometimes more. The last paragraph is key: “Who would be less likely to show up for the test administration: a child of working immigrant parents in East Boston, or a child whose parents have been paying for test prep for the last two years,” asked Green. A test in the 6th grade should determine your future. The pressure is insane for 11 year olds. There is no reason it can’t be performance based, essay submitted, some sort of huge research project etc. but giving kids one chance on one day to decide their future is bullshit. (BLA mom here)

The level of disconcert that she expresses ought to concern those who administer Boston’s schools. The great disconnect is not between exams and parents but between the School system and parents.

The current plan must be set aside for at least much extended, open discussion.