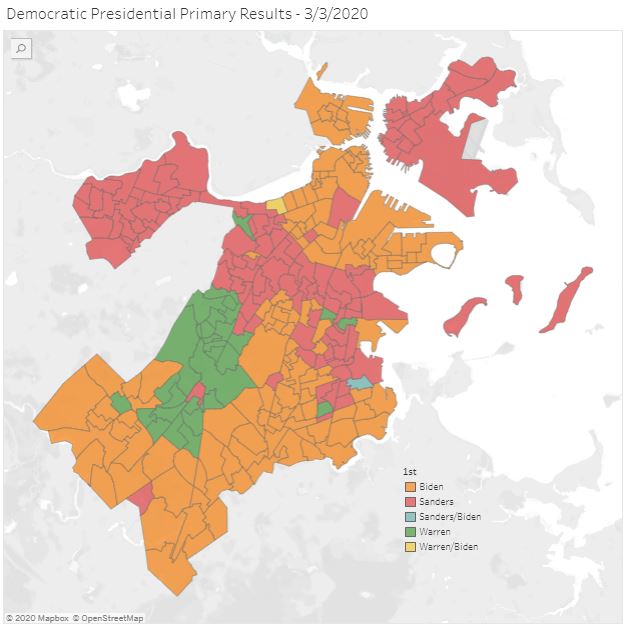 On Tuesday, Joe Biden won the City of Boston vote — by 56 votes, bringing to mind Julia Mejia’s one-vote win in last November’s at-Large City Council race. This time the close division between Boston  voters extended further : Liz Warren finished third, but within 3,500 votes of second place. The map above shows the distribution of wins among the City’s 255 precincts. It’s an unusual map to say the ;least. Gone from it is the stark gap between “new Boston” voters and the “traditional vote.” In this map we see strips of wins extending across the city as well as wins, for Biden in particular, among all kinds of voters who recently haven’t agreed on much of anything.

In that respect, the map recalls the map of Charlie Baker’s 49.3 % near miss against Jay Gonzalez in the 2018 Governor race. Baker won 90 precincts in very different neighborhoods, again, winning the support of vote groups that had rarely agreed on much. If we superimpose the Baker 2018 map upon the Tuesday primary map, we can see the beginnings of a pattern that proclaims what political Boston has now become : a City of very dissimilar vote groups voting similarly for very dissimiliar reasons. This is the essence of coalition, as opposed to an Us vs. Them division such as dominated Boston voting for 100 years.

And now to my analysis.

Joe Biden won 70 of the 90 precincts won by Charlie Baker in 2018. Sanders won 19 of them. (the other was a tie vote between Biden and Sanders). Liz Warren won none of them.

All of Liz Warren’s wins were in Baker’s worst precincts in the City. In all, she won 39,188 votes in Boston.

Warren won almost only the committed, ideological progressives of Jamaica Plain and Roslindale. Sanders’s wins were much more diverse : he won all the precincts in which students represent a large percentage. He won most of the heavily Hispanic and Cape Verdean precincts. He won precincts in East Boston that aren’t very Hispanic at all, nor populated by students. He won Chinatown’s Ward 3, Precinct 7. He won four of five Mission Hill precincts and the three “back of the Hill, Hyde Square Precincts. He won Fort Hill and Egleston Square. He won the Jewish Senior Home precinct in Brighton — one of Charlie Baker’s best in the City — probably the last instance we will see of Jewish ethnic voting in a City with almost no Jews any more. And he won the most Vietnamese precincts in Dorchester.

Joe Biden won the rest : All but one precinct in West Roxbury; all of South Boston; all of Hyde Park; one Roslindale Precinct (Ward 18, precinct 11); all of English-speaking, Black Boston; the Haitian-majority precincts; all of Charlestown; all of the Back Bay, Beacon Hill, the North End, Downtown, and the Seaport; Mission Hill Project (Ward 10, Precinct One); and most of “traditional” Dorchester. As I indicated above, Biden’s wins closely trace Charlie Baker’s 2018 successes. Baker did not win any Black-majority precincts, but in the English-speaking Black precincts — and in the Haitian majority ones — he took from 38 to 45 percent. Biden won these precincts that Baker did not  carry because Baker faced only one opponent; Biden dealt with two.

Meanwhile, Liz Warren carried only a single type of constituency. Coalition was out of her reach. That’s what happens when you are primarily an issues candidate. Those who don’t agree with this or that issue go elsewhere if they have options, and on Tuesday they had options. (Note also that Congresswoman Pressley, so seemingly unstoppable in recent Boston elections, could not propel Warren, her candidate, to victory in any English or Haitian Creole-speaking Black majority precinct.)

Joe Biden can be very satisfied with how he won the City, just as Charlie Baker had to be more than pleased with winning 49.3 percent of our vote. Biden’s successes carry less good news for Mayor Walsh, whose re-election campaign has already begun. The Warren vote is almost certainly not his next year. The Sanders vote will most likely not favor him either. Nor is it clear that all of the Biden voters favor him. Walsh has a ton of work to do, to win voters who voted out his Democratic ward committees, who dislike his aggressive development agenda, who are dissatisfied — for very solid reasons — with Boston’s schools, and who want to see a person of color finally. be elected Mayor. It cannot please him to see State Representative Dan Cullinane decide not to seek re-election — Walsh’s own representative — in a district in which “traditional” voters count less and less every week. It can’t please him to see the old-line, Hyde Park crowd pushed entirely out, politically, and, likely, residentially, in one of the most ruthless tribal battles I have seen in Boston since the Jewish community of Blue Hill Avenue was viciously block-busted fifty years ago.

Can Walsh be re-elected ? Yes he can. He has enormous power to effect change and to dole out $$ to this group or that. He may, in fact, have to do what amounts to buying a re-election. He will have to do a ton of it, every day, picking off voters 100 at a time, every day, if he is to turn back a tide that begins to look like a tsunami.