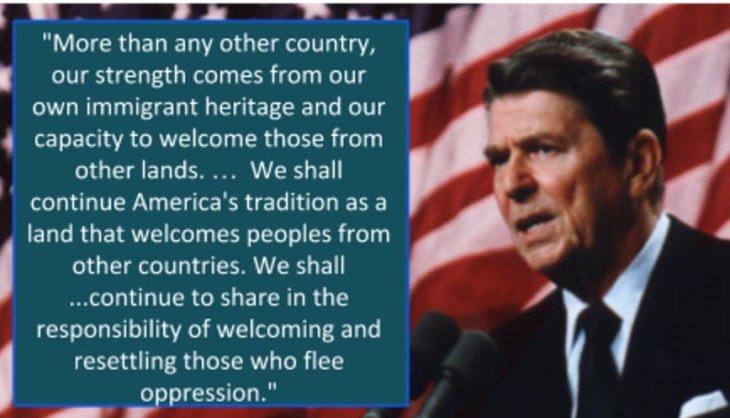 ^ our principles include the above, an expression upon immigration that is for us a principle.

Because our views do not mirror the partisan rigidities afoot in today’s America, many who read our columns express puzzlement. “I am trying to figure you out” — I hear that a lot from activists. This is not a mistake. If you’ve hot-wired yourself to expect political people to track the current lockjaw, you’ll definitely find my views peculiar.

Enough then. The following are our core principles of American politics :

( 1 ) We stand on the Constitution and its Amendments, the ideals, covenants, and purposes expressed in it and in its Preamble. We are not ready ever to compromise its divisions of power between branches of government. In particular, the Presidency has acquired far too much a portion of the Constitution’s grants of power. The office needs to be rolled back and limited to the magisterial functions given it in Article 2.

( 2 ) We believe that every person has the right to be who he or she is, and to have full command of his or her own body, and that it is none of anybody else’s business who you are or how you make decisions about your body and its health care.

( 3 ) We believe that every working person living in America has the right to a living wage, at least, and that many working Americans need public assistance in order to pay basic bills is a situation intolerable.

( 4 ) We believe that every resident, and every visitor, to America, has, while on American soil, all of the civil rights guaranteed to us in the Constitution, save only one exception : only citizens may vote in our elections. By “every,” we include immigrants as well regardless of their status at law. Even an undocumented person has, so long as he or she is upon American soil, all of said rights including specially due process rights. We believe that separation of parents from children, at the border, as is happening now, is a violation of the Eighth Amendment’s prohibition of “cruel and unusual punishments.”

( 5 ) We hold that taxpayer dollars are to be demanded sparingly, allocated transparently, spent efficiently, and their use accounted for with absolute probity.

( 6 ) We are mindful of the legacy of chattel slavery, which even though abolished for good 145 years ago, remains unresolved by way of its virtual continuance under “Jim Crow” regimes until the maid 1960s, and we hold that only full monetary compensation for unjust wage theft — which is what slavery entailed, and Jim Crow perpetuated — can put to rest a legal institution abolished six generations ago.

( 7 ) We believe that continued, intentional, public expressions of racial, sexual, religious, or national origin bigotry renders a person forever unfit for nomination to, much less election for, public office, unless there is a public apology sincerely offered.

( 8 ) That said, we are unimpressed by those who would preach to us, or condescend to us, on account of our opinions on matters of identity: because these sorts of prejudices defy preaching, especially made in the spirit of condescension. Minds are not changed by being shamed, indeed such tactics easily lead to push-back, which defeats us all.

( 9 ) We agree that the climate is changing, but we’re skeptical of predictions of immediate doom and that “there’s no time to lose.” We don’t accept crisis states of mind and certainly not in politics, an arena of infinite complexity and contradiction. History teaches that the opposite often happens to predictions of doom and hurry. The problems created by climate change can be addressed in the ordinary course — planting trees, using innovations to clean the oceans, etc. — without recourse to panic — not to mention calls made by advocates of crisis to impose trillions of dollars of taxes and abolish entire industries.

( 10 ) The big problem these days is the enormous inadequacy of worker earnings. Prices have grown enormously since 19070, but personal income has not. Workers should be earnings at least $ 25 an hour in economic hot-spots like greater Boston, and at least $ 15/hour in places economically colder. If workers earned this sort of income, economic growth would jump, and people would be able to jump — so to speak — with it.

( 11 ) The Constitution authorizes the office of President, but in no way does the Constitution make the president a king. Mr. Trump is wrong to demand that he can do as he likes. He is subject to the law just like anyone else. He must have no power to block witnesses, or deny properly requested documents. Nor can he or any Executive officer refuse to answer questions of a duly constituted Congress Committee. Only Executive Privilege bars Congressional oversight, and “E P”must be a claim very narrowly construed.

( 12 ) immigrants Are America. To bar an immigrant, except for irrefutable cause, is an act as heinous and dangerous to American liberty and ideals as a mouse capture in a cat pen. Immigration all but defines who are as a people and as a nation; and as Senator Romney has said, “every faith enriches our nation.” So does every immigrant.