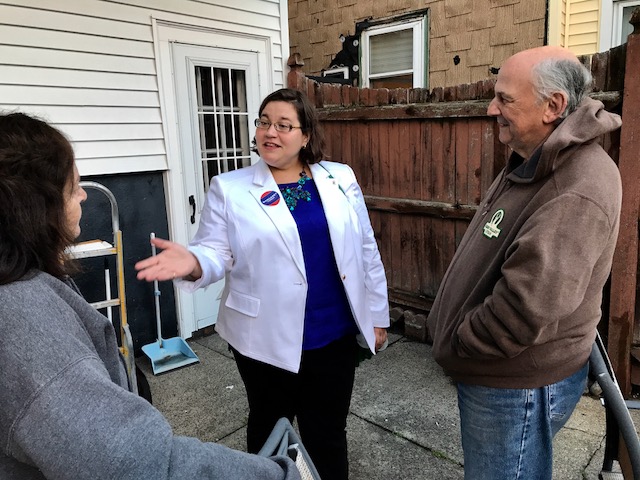 ^ how it’s done : door knocking on Saratoga Street in a precinct of strength, this was our second visit to this couple, and they became enthusiastic supporters. Voting like being paid attention to !

Having recently concluded my latest campaign assignment, and it being almost my fiftieth year of doing this stuff, I intend in this column to set forth the guidelines that I apply to campaigning. These apply especially to local elections such as the one still going on in District One :

Rule No. 1 : the voters make the decision, and every voter has his or her one vote to give, a power which every voter takes very seriously. Voters know their own interests quite well, no matter what we out here may assume. Always respect the voter. And this : never try to fool the voter. Unless you are Donald Trump — and you aren’t — it doesn’t work.

Rule No. 2 : voters want to be asked for their vote. The best way to do this is b y the candidate, herself or himself , one on one with the voter at his or her door. There is no substitute for it. You MUST door-knock every voting door.

Rule No. 3 : there are no short cuts to campaign success, part one. Using a “super voter” list to focus only on those voters sure to vote does three things wrong : ( a ) it cuts out those voters who would surely vote except that no one campaigns to them ( b ) it consumes time. From one super-vote household to the next you probably walk by three or four other houses. Why not knock those doors to, since you’re already there ? ( c ) even if a voter might not vote, better that she know your name and maybe talk about you to her neighbors.

Rule No. 4 : every campaign operation other than door-knocking is a short cut and entails a loss of effectiveness. It is fine to do a district-wide mailing, yet even the best mailing — with an actual stamp, not a bulk permit, gets read by only a portion of those mailed to. “Lit drops” arouse even less attention. You can do these, and you probably should, in order to reach voters who won’t open the door when knocked or who are not home, but never think that they replace that one on one door visit. They don’t. “Stand outs” are just as worthless. Drivers pay attention to the road, not to sign holders, and most of the drivers don’t live in your district anyway.

Rule No. 5 : campaigning entails physical work. Door knocking, stuffing and licking envelopes (if anyone does this any more), hanging house or lawn signs — all involve physical effort. Physical is the surest way to prove to the voters that you really do want the job you’re seeking — want it badly enough to sweat and exhaust yourself.

Rule No. 7 : run your own campaign and don’t worry about what the opponents are doing. Your campaign operations are hard enough to accomplish. Get them done, and you’re likely ahead of your opponents, because most campaigns can’t accomplish their plan.

Rule No. 8 : do two things well rather than eight things badly. Campaigns that try to do too much almost never succeed. If you can get your door-knocking done, and do effective mailings, and hols meet and greets where available, you’re likely way ahead of your opponent. Most campaigns can’t get even the simple stuff done. Your opposition may come up with a brilliant operation ? Most likely you will not be able successfully to do your own, because every operation takes planning, mostly with volunteer help, and it’s very distracting to shift your campaign on the move. Save that brilliant opponent’s idea for the next time.

Rule No. 9 : Repeat Rule No. 1 — the voters make the decision. Do not try to pressure the voter. Voters do not respond well to being “heavied.” Relax. Listen to the voter; allow him or her to convince him or herself. A propos, a door knocking tip : let the voter do most of the talking. She’ll think you a really great candidate, because after the door visit the voice she’ll remember is her own, and her own ideas, which she will then attribute to you.

Rule No. 10 : thank your volunteers and donors; thank them every day, every hour. You can never say thank you enough. To a volunteer who has busted ass in the hot sun or pelting rain for hours and hours, a thank you from the candidate is like a blessing by God. One’s whole soul lights up when a “thank you” is said. Also : send hand-written thank you notes to the voters who commit to vote for you.

Rule No. 11 : go to your strengths and opportunities. If your issues command the voters, do more issues advocacy. If you are drawing more support in one precinct than another, concentrate your follow-up efforts on that precinct. Build on strength. This is another way of doing that old campaign saying that you concentrate on your “saints” and on the “saveables,” while avoiding the “sinners.” It works. Applied to a precinct, if you can take full command of one precinct, the support you achieve therein will radiate into the entire district, because people in one precinct know many people throughout the District. That kind of solid precinct enthusiasm will also juice your fund-raising.

Rule 11 exampled : If you have 25 precincts in your District — as does Council District One — five really dominant precincts of support can overwhelm twenty precincts of mediocre result. Here’s how and why :

( 1 ) to maximize support in  a great precinct, go back to a house where a voter you’ve met likes you and meet the rest of the voters there. (To not annoy them, you must ask the voter you met first if it is OK for you to come back and meet the others in her household. When she says “sure,” you’re set.) Do this until you have met three out of four, or four out of five, and so non. Remember : every voter has a vote to give, and you cannot assume that the voter who likes you will go back and tell his family to voted for you. I have done this often, and it works. It isalmost impossible for your opponent to weaken this intensity of support.

( 2 ) If you can gain this level of support in two, maybe three, precincts next to one another, your strength area will border a great many other neighborhoods that will surely feel the effects of your strong areas. Word of mouth talk about you then  arises, and believe me, I’d rather have great word of mouth than all the color-printed, bulk-rate mailed eight by ten advertorials that too much money can buy.

Rule No. 12 : you cannot count a voter as committed to you unless he or she says “the magic words” : “I will vote for you” or “you have my vote.” Anything less definitive is NOT a commitment. Nor can you “bank” a commitment by that one meeting. The voter can change his mind, or forget that she committed. Stay in contact with committed voters. Shepherd them — from commitment day to election day.