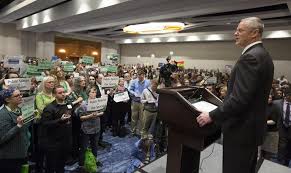 ^ Governor Baker booed at Spirit’s LGBT Networking event : refusing to lead, you get led. But why did he let this happen to him ?

Governor Baker’s basic governing strategy is caution. Take no step without knowing all the likely consequences. Be prepared.

It’s a wise principle, prevents Baker from stepping into all kinds of quicksand. But on the matter of public accommodations protection for transgender people, caution has landed Baker in a quagmire.

I have no idea why he has ended up here. I thought I understood his reasons for waiting to take a position. I figured that he did not want to raise a social issue during the long months that he took to battle, and defeat, the social conservative, special interest group whose consultant took over the state’s GOP back in 2012. I assumed, too,  that having won this battle, Baker intended to speak at Spirit magazine’s LGBT Networking gala for the specific purpose of proclaiming support for that “Trans Bill.” I was wrong.

Baker might easily have chosen to fight his GOP state committee control battle on the social issues. There was an entire army of Massachusetts Republican activists, committed to Baker’s team, who were ready and even anxious to fight that fight on the actual matters dividing Baker from his opponents, and not on the anodyne “teamwork” rubric that euphemized what was really going on. It would have beem much, much better for him had he taken that route. He would have won a clear victory, ON THE ISSUES, rather than a merely tactical success, and he would not now be in the squeeze.

Instead, he played it safe.

So what Is going on here ? What IS Governor Baker’s thinking ? Did he really think that, given what is happening to trans people’s rights in Southern states, and his refusal to take a poisition on our own “trans bill,” that transpeople at the Spirit gathering would not voice displeasure ? If he thought that, he — who famously states that he discusses major issues with his staff — is not being well advised. Or else he himself does not understand what being a transperson is all about.

Transgender is a fact and a mystery about both of which many people find themselves bewildered. Discovering that one is transgendered is bewildering to many transgender people too. The ordinary practices of social custom have never prepared a transperson for dealing with his or her gender. Our society is still working out how to represent transgender  in social interactions. Even the pronouns of it are in flux. Still, the fact of transgender stands, for people who are it and those who meet up with it; and that social learning is well along now and cannot, dare not, be reversed.

All of the main arguments opposing transgender people’s civil rights amount to denying that transgender people exist. The argument most mistaken, it seems to me, is the claim that a person is not transgender unless he or she has had sex reassignemt surgery (commonly called “SRS”). Gender is not sex, is not one’s chromosomes, is not physical at all. It is of the mind and of the soul, it is of identity. SRS cannot change a person’s gender, only their bodies; transgender is not about the body. Many transpeople choose not to go through SRS. Why should they ? If you are a woman, your body is a woman’s body. And vice versa.

It would be quite understandable to know that Governor Baker hasn’t figured out transgender. Nor would I expect him to say that if that is the case. But grasping a situation is not the same as the politics of it. The politics of the “Trans Bill,” I DO expect Governor Baker to master, and to lead. I have no idea why on the “trans bill” he has made himself a kind of hermit.

The booing that stopped Baker’s Spirit speech ws not spontaneous. In the midst of the protestors were hyper-partisan, Democratic operatives looking for pounds of Baker’s political flesh. They have been carping at Baker all along, have done so on MBTA reform, and on charter schools cap lift; but until now, nothing they did or said bruised Baker at all. That has changed. And that is his faiult. Caution may have much to recommed it, but about the “trans bill” the time for caution has ended.

It ended when police chiefs, the Suffolk County District attpoery, and the state’s Attorney General all testified in favor of the Trans Bill. It ended when every Boston sports team said Yes to the Trans Bill; when 150 major busineses joined in, and 350 faith leaders; when the Boston City Council voted unaimously to support the bill.

Governor Baker’s silence on the issue has also stopped House Speaker DeLeo. DeLeo supports the bill; but he is clearly chary to bring it forward only to be embarrassed by a reluctant Governor. Until now, DeLeo and Baker have worked hand in hand on every significant legislative matter, including the “no new taxes, no new fees” state budget. DeLeo does ot want that partnership to weaken, given that the State Senate under Stanley Rosenberg’s leadership has gone its own way. Yet the DeLeo and Baker relationship may loosen, given that the Trans Bill will now be voted by the Senate. Even the all powerful Speaker dares not table a bill that has become a symbol for the entire State of social progress.

It need not have come to this. hyper-partisanship, in particular, is the enemy of common sense goverment, of reasonable reform. it is a political sin to allow partisanship, beaten down so successfully, to rise from its well-deserved grave.