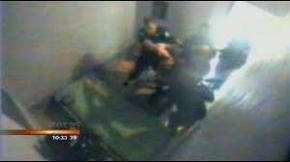 ^ some call it homicide : Joshua Messier, a schizophrenic, dies at Bridgewater

We like to think of our state as a beacon of progressivism. Don Berwick, a candidate for governor, calls us that. Our history justifies the call. Unhappily, we do not always live up to our reputation. What has happened these past years at Bridgewater State Hospital shames it.

The death of Joshua Messier, a young schizophrenic, at Bridgewater, is known to all of us thanks to much recent media attention. Some have called his death at the hands of Bridgewater employees a homicide. Even if not that, the death should never have happened. Frankly, Messier should not have been placed in the Bridgewater we now learn about, a horror in which residents are abused — tortured, as an editorial in today’s Boston Globe makes clear.

It is time to close Bridgewater entirely and to establish residential options for all the people now forcibly kept there.

The injustice reeks all the more because as long ago as the 1960s we thought we had ended the horrible career of Bridgewater. I remember the “Titicut Follies” movie, directed by Frederick Wiseman, that — to quote Wikipedia — “graphically depicted the existence of occupants of Bridgewater, some of them catatonic, holed up in unit cells, and only periodically washed….inmates/patients required to strip naked publicly, force feeding, and indifference and bullying on the part of many of the institution’s staff.”

The movie exploded into public discussion, sensationally; but from it came what we thought was major reform. Cerrtainly the systematic torture of Bridgewater patients was curbed, the worst abuses put an end to.

As the op-ed by Roderick MacLeish and Stephen Delinsky describes, mentally ill people at Bridgewater are isolated, tied down, denied any diversion at all, restrained perhaps for two days, forced to defecate into a bed pan.

The frustration and anger go deeper still. MacLeish and Delinsky tell us that in 1988 (!) they “negotiated a settlement agreement involving Bridgewater that created a secure, therapeutic hospital setting where men with serious mental illness and no criminal history could be treated in a human way…(but)… in 2003, the hospital was defunded.”

Mitt Romney was our governor when that was done.

Yet Governor Patrick cannot put the blame for recent Bridgewater on Romney. Patrick has been governor since 2006 and has made no move that I am aware of to do anything about Bridgewater abuses. (Indeed, Patrick has continued the defunding of state social services, cutting the budget for Massachusetts DCF by over 100 million since 2009. we live with the tragic consequences of that de-funding even as I write.) 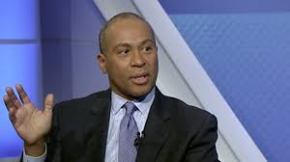 ^ much to answer for : Governor Deval Patrick

As I stated at the beginning of this editorial, candidate Don Berwick has much to say about Massachusetts being progressive. He proposes many initiatives that seem quite extreme — some of them unwise. Even if one thinks them worthy, one hears not a word from Berwick, who is a pediatrician and touts his proficiency in health issues, about Bridgewater or the state’s abuses there.

If a man like Berwick does not speak up, who in power will ? Charlie Baker ? Maybe. We shall see.

It is time for Massachusetts to close Bridgewater entirely and thus extinguish forever the culture of abuse that dominates it. House the criminally insane in a new institution established with rigid guidelines for treatment first, custody second. Offer comfortable residential options to mentally ill men with no criminal history, staffed by health care professionals, not prison guards. Appoint an ombudsman to monitor the enterprise. And pay substantial financial compensation to those who have suffered at Bridgewater, in some cases for many years, along with a full, public apology to them and their loved ones.

In Massachusetts, we do usually get it right. But only through constant vigilance do we keep the vehicle of progress moving up the road. It’s time for some serious keeping. Let’s do it.