Since I last saw the Democratic Five at a candidates’ Forum — about six weeks ago — all have sharpened their profiles considerably. On stage at the SEIU (Service Employees International Union) candidates Forum today, there was lots of specifics, even some debate, and only a touch or two of the vague.

Specific, the five needed to be today. The SEIU’s members do the campaign grunt work and they have an agenda that they insist upon — and which they’ve proven, time and time again, they have the muscle to see enacted. Every one of the five badly wanted the SEIU endorsement. They want its game-on. They need it, and they made their need plain to the gathered attendees — at least 500 strong, a massive showing on a Saturday morning.

In return, SEIU members know which candidates have a chance to win the race and which ones probably don’t. So how did the five do ?

Grossman reminded the gathering — maybe too many times — that they had endorsed him before, and he had always kept his promises and “stood with” them on strike lines and issues fights. He gave voice to more specific agenda items than any of his rivals — policy points are his great strength. But he missed the point of one question — about restoring rights to ex convicts : the right the questioner wanted to hear about was voting right restoration — and, addressing the minimum wage, he said that “I will veto any minimum wage bill that includes an unemployment insurance give-back !” As this give-back is Speaker Robert DeLeo’s price for supporting the minimum wage hike, Grossman opened up the door to a running fight with the Speaker — who, like his predecessor during the entirety of Deval Patrick’s two Governor terms has proven that the Speaker always wins such fights. And that any Governor who fights him comes away weakened. Grossman either is just blowing smoke here, or he has ceded the entire minimum wage issue to Charlie Baker, the almost certain GOP nominee, who has said — no ifs ands or buts — that he accepts Speaker DeLeo’s give-back and can thus get the $ 11.00 per hour minimum wage hike enacted. (Baker has also made the issue of expanding the earned income tax credit his own, and it was interesting to see that at least two of the candidates, Coakley and Avellone, mentioned expanding earned income credits. Two months ago, no Democrat at Forums mentioned it at all.) 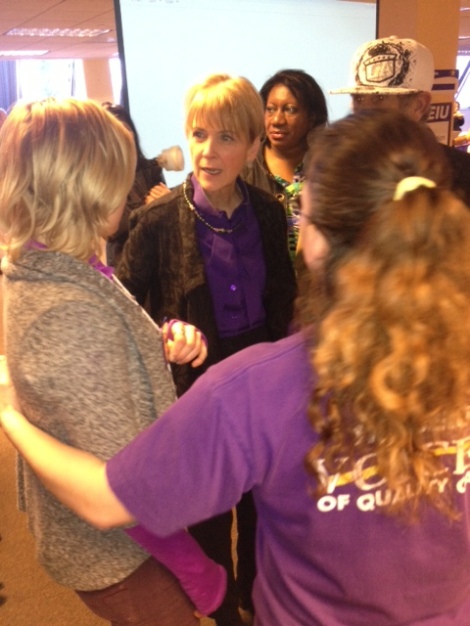 Coakley campaigns with a light touch and an eyes-up grin that often feels snarky. She took a middle route at the Forum : not endorsing driver’s licenses for undocumented people, refusing to grant bargaining rights point-blank to public defender lawyers, sliding away from Don Berwick’s single payer health insurance call. Coakley played careful lawyer : she made clear that she agrees with SEIU’s wage hike and immigrant rights agenda, but maybe not on as all-in a basis as SEIU would like to see. Coakley spoke personally about mental health issues, and with real life stories about income equality; and before the Forum began she posed for many pictures with SEIU’ers who smiled like crazy to be photographed with her. She even said “we have to improve the economy for everybody.” 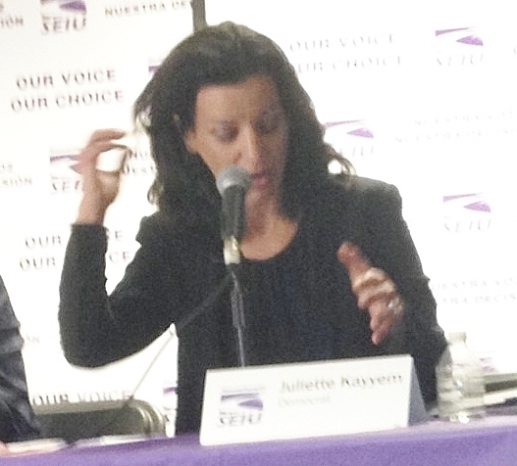 Kayyem continues to converse at times, in a Forum setting where conversation wanders off message. But she has become much, much more forensic in her approach; at SEIU she made big, clear points addressing criminal justice reform; she rejected Don Berwick’s single payer call, saying “even if it can be done, it can’t happen until 2018. we need a Governor for right now.” Obviously, Kayyem has realized that sweetness and glamour — which she owns in this race — must bring toughness and advocacy aboard. Yet the generalities continue. She said “Massachusetts has done well but we can do better.” Better how ? She posed an actual plan: “three points…Save, share, and grow. save money in criminal justice spending. share it by setting up a ‘green bank.’ Grow by investing in education and comprehensive immigration reform.”

Kayyem stressed her immigrant roots; that she’s a mother and wife; and — taking full advantage of being two decades younger than her rivals — that she is “the young generation ready to govern.”

Berwick has no peer when discussion turns to health care. If he were running for Massachusetts Commissioner of Health and Welfare, he’d win by acclamation. He decries our state’s health care failings — its waste, high cost, inequities — as rigorously as Baker is likely to do. Berwick also speaks to income inequity and the “low wage crisis,” as SEIU’s Forum hosts put it, as passionately as anyone, maybe more. But Berwick overshoots the progressive mark. His solution to the health care system’s failings is single payer — a worthy idea, but it isn’t going to happen soon, and as Kayyem said back at him, “we are electing a Governor for now.” Berwick also seeks a graduated income tax (though he didn’t call it that), an idea that Massachusetts voters quite a while ago rejected in two separate referendums and which would hardly entice to our State the businesses which every Forum candidate, Berwick included, say that Massachusetts needs.

Avellone speaks authoritatively about the state’s drug abuse crisis, about recovery and re-entry, and about CORI reform. nd like all the Forum candidates, he supports raising the minimum wage and protection of low-wage workers’ bargaining tights, including extending them to hospital workers who don’t know have that right. Still, Avellone barely seems a possible Governor rather than what he has been, a town selectman. At no place in the Forum did he address the big picture, the massive responsibility sphere that we entrust to the state’s Governor. The Big Dogs of the Legislature would eat Avellone for lunch. So might the State House lobbyists. Avellone made some friends at the Forum; I doubt he won many members’ endorsement.

It was too bad that Charlie Baker wasn’t at the Forum. He had a delegate rally of his own to attend, in Saugus; and the GOP convention takes place next weekend. Still, an opportunity was missed. Baker could have addressed the health care issue authoritatively; the minimum wage and earned income credit; criminal justice reform; homelessness; schools reform; and jobs and innovation — even bargaining rights. It would have been an opportunity to expand his personal reach where a reformist candidate needs be : directly into the most important front of the labor movement, the fight against low-wage situations and all the burdens that low wage work puts on workers and taxpayers alike.