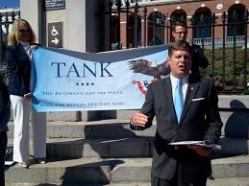 ^ Geoff Diehl (R-Abington) : a good guy makes his pact with an unserious rant

Massachusetts voters going to the polls next November face at least two referendum questions. One, we support : raising the minimum wage to $ 11.00 an hour. we have already editorialized our reasons for casting a “yes’ on this referendum. The  proposal, we strongly dislike. This one seeks to cancel the three percent gas tax hike enacted earlier this year, by which our state will fund all sorts of needed road and public transit repair and upgrades.

That “Transpo Bill,” as it has come to be known, has already taken one hit : repeal of the software tax included in the original enactment. We agreed that taxing technology was a wrong idea. Technology should be encouraged and aided, not nicked. It is different with the gas tax. Driving wears and tears our roads and bridges; their upkeep is a public charge –and we make it so because driving keeps the economy moving, pun intended — and thus the gas tax.

The same people who initiated the software tax repeal now initiate the gas tax repeal. This time, their motives are suspect. From what they say at facebook and on twitter, they appear to oppose all public spending, or to view it suspiciously, as if public spending were a kind of con man come to scam us. Many of these opponents are Tea sorts, who view public spending as extortion money paid to “moochers” and “illeagl aliens.” We’ve already seen their impact upon the EBT program, a food-buying fund by which those living on the margins try to survive.

A referendum that begins with this mindset is tainted ab initio. By two arguments, its sponsors seek to justify it. We reject both :

1. they tell us that gas tax revenue is often spent by the state on programs other than road and bridge repair and transit upgrades. True enough, but so what ? This happens because the anti-public spending crowd denies the state funds that it needs for those other programs, many of them immediate, such as policing, courts, and administration, to pay for which the State’s Commissioner of Administration and Finance simply decides to defer road and transit work. Denying the State new gas tax revenue is going to worsen this situation, not improve it.

The referendum proponents already know this. They know the whole flap is a nullity. Its  REAL purpose is to raise the hue and cry against “moochers” and “illegal aliens,” anti-spenders’ favorite scapegoats, and thus to help elect no-spending legislators in Districts outside the Boston media zone, within which the unseriousness of this device would be fully and quickly debunked.

Someday, if and when the no-spending crowd actually adduces a serious reason — and attacks upon its scapegoats’ desperate lives is both flip and despicable — for why they oppose taxes to fund State spending, we will listen respectfully to their arguments and maybe even agree. I’m not holding my breath.