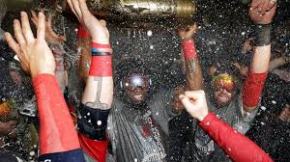 ^ champagne and pitch counts : the Red Sox go from bottom to top

Baseball is not my beat, not at all. But today it has to be. Here in my City, the “olde Towne Team,” i.e, the Red Sox, a team that finished in last place in 2012, this year won their division, league, World. and did so at home, for the first time since 1918, when Babe Ruth was still pitching for the Sox (and setting pitching records long unbroken).  In six games they defeated the St. Louis Cardinals, a team dubbed pretty darn good but which proved highly flawed. The Sox had some flaws, too, and these were hung out to dry; but their flaws were fewer, their hitting devastatingly opportunistic, their pitching good enough — especially Jon Lester and John Lackey.

Lackey ! There’s a story. Written off a couple years ago, labeled a head case by folks who had forgotten, or never knew, just how strong a pitcher Lackey used to be, he became his strong self once again. He pitched just long enough in last night’s deciding game — two outs of the seventh inning — to get the game into the hands of the Sox’s proven late relievers : Tazawa, Workman, Uehara. And this they proved to be. When Lackey finally did get pulled — after giving up four straight hits and one run —  the bases were loaded, the score 6 to 1. The Cardinals needed just one big hit to make things interesting. Tazawa got that last out. The Cardinals never threatened again.

What can you not say about a series that had not one but TWO game decided on fluke plays ? Never before had a World series game been decided by an obstruction call or a runner being picked off. But that’s exactly how Games 3 and 4 ended. Home runs boomed out of nowhere. Johnny Gomes had one in Game 5; it won an otherwise low-scoring pitchers’ duel. Mike Napoli had one. So did Stephen Drew, in last night’s clincher. The real story of this Series, actually, may be that both teams weren’t all that great. Other than the Sox’s David Ortiz, it’s pretty hard to find among either roster a potential Hall of Famer. Great teams do the expected. they roll over the opposition, inexorably : think 1975 Cincinnati Reds, a team with two Hall of Famers (Johnny Bench, Joe Morgan) and one other, Pete Rose, who would have been Hall’ed had he not been Pete Rose. The Cardinals weren’t a great team, and neither were the Red Sox.

The red Sox were just better at devouring the other team’s mistakes. For that, one man deserves all credit : John Farrell. Never, ever say that the manager doesn’t matter. He does matter. Anybody who watched spastic Bobby Valentine do a Three Stooges job last year and then watched Farrell create a team from last year’s leftovers, give them a method, and see them use that method all the way to victory, you know that the manager makes a huge difference. All the more is that the case when the team he is managing isn’t that great.

And then the beards. It’s a silly thing, but sometimes a shattered team looking for a ring to bind them needs a talisman that looks silly in every other context. And so beards it was.

Farrell’s greatest series was not, in fact, the World one. It was the ALCS, in which his Sox found ways to beat the Detroit Tigers. Here was a team as close to great as I have seen in a long time. it has Miguel Cabrera, the only triple crown winner since Carl Yastrzemski did it 46 years ago. He’s a sure Hall of Famer. It also has baseball’s two best pitchers, Justin Verlander and Max Scherzer, and a third, Doug Fister, nearly as good. yet the Sox beat Verlander 1 to 0, as John Lackey out-dueled him. This was John Lackey’s finest hour. Verlander made just one mistake pitch : result ? A Mike Napoli home run. Ball game. The Sox also beat Max Scherzer (season record 21 – 2) not once but twice. The method ? Run up his pitch count, get Detroit’s less than great bullpen into the game, and pounce.

Thus a team that suffered 35 strike outs and was overmatched 99 % of the time used that wayward one percent to beat a team that had greatness in its sights. After that achievement, the World Series was theirs for the wrapping up.