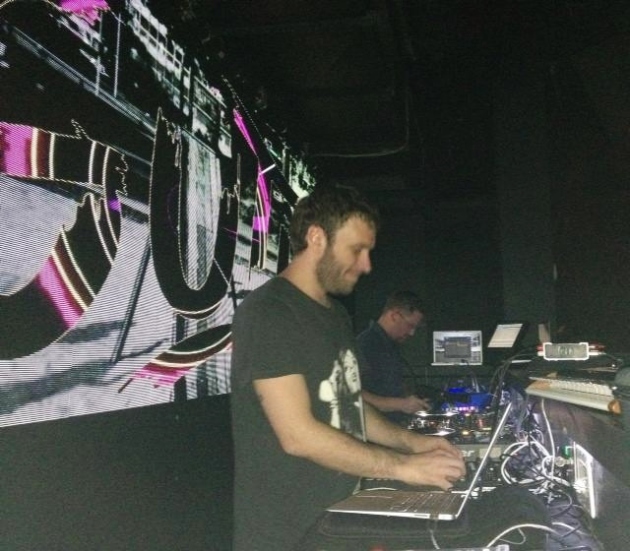 On Sunday night, Boston dance music fans had an opportunity to see Argentina’s Guti drop a set in prime time. At Bijou, the rapidly rising DJ — whose full name is Jose Maria Gutierrez Hernandez — delivered a set unlike any other that this writer has seen, one with bottom beats and overriding detail so separated — and so individually spotlighted — that his two hours amounted to two entirely separate sets sharing the same time slot and space. There was realism in that: after all, two people dancing on the same dance floor are, in fact, two separate lives confronting in the same space and time. Guti’s Argentina has, for over 100 years, owned a dance, the tango, in which hot drama arises from the friction of two separate lives acting in the same space and time. Only fitting, was it, that Guti gave his Bijou fans a 21st century version of tango drama, a dance very different in its passions but much the same in its two wills willfully dancing.

In tango, the clash is of anger, of dislike, of sexual heat that forces itself through mutual rejection, power plays, sex as pain, humiliation, surrender. Nothing this dark happened in Guti’s Bijou set, but much the same plunge was implied — risked, even — yet gently avoided in his very dissimilar two waves. First came a big, alpha-male’s boot stomp, next an interlude of high-note bird’s calls followed by the boot stomp returning. This was the set’s pattern; the boot stomp had its minutes, only to give way to equal minutes of flutter, lullaby, whistling, twisty noises: seduction in a soprano octave.

His music amounted to two themes having an extened conversation, a give and take that, late in set, moved toward resolution as Guti mixed the two themes together in complicated angles — in each of which the two conversators worked their way around each other, as if to gain advantage. Yet no advantage was to be had; each theme in his \music maintained its tone, its movement, its initiative, and if, in his mix, the focal point between them tilted in one direction. Guti brought it back again to the other direction only to end up in the middle as stomp and flutter circled one another like side by side whirl-a-gigs of sound. Such too, was the tango.

Guti has, in the past four years especially — he has DJ’d for far longer than this — produced tracks, or re-mixed the work of other producers. His prolific body of work has attracted devotees almost everywhere that dance music is enjoyed. Many sound dream-like in their delicacy and whimsy : “Hope,” Ray Foxx’s “The Trumpeter,” “I’m feeling Interglactic,” Wols’s “Bushmans Oversized Vibe,” for example, and his remix of Livio & Roby’s “We Are.” Eqully many do a bounce, from squeaky squiggly to boot stomp: his remix of Davide Squillace’s “The Other Side of hiustler,” “option One,’ and “Bususki,” and “Non Adepto.’

This list by no means exhausted the sequence of excerpts from tracks, both his own and remixes, that he input to his Bijou workout. Using a PC program this writer hasn’t seen before, one that enabled him to pick and hunt from one track to another and punch it all into a scant two channels of mix, Guti squashed and jiggled the knobs on the PC mixboard. He cranked more two, three,m even four at once, pushing and pricking the sound into conversational cant. There was buffoonery in his mix and boasting too; zig zags and finger pointing. All of it pressured the dancers to move not just legs and hips but also hands, head, elbows, knees. Body talk took on advanced meaning — but not so advanced that a pair of classic tango dancers wouldn’t have understood every surge, sag, lean, pucker, wink, and prance in Guti’s battle of two wills willing upon each other.

It was aset not to be missed, as sublime and imaginative as any that this writer has seen in many, many years.

Opening for Guti was DJ D-Lux, whose reidency at Re:Set Wednesdays (in Cambridge) has made her a local, Boston star of deep house grooving. In front of Guti she played exactly what she is best at : two hours of rolling rhythm in murmur tones, a succulent flavor evoking the sweaty sentiments that deep house lives by. D-Lux’s set could easily have headlined almost any dance music club in the Boston area — at least at those few clubs hereabouts that are willing to embrace the deep house sound in its fullest evocation.